By Jolene Nacapuy, Kathleen Arellano on February 19, 2016 in Basketball, Sports 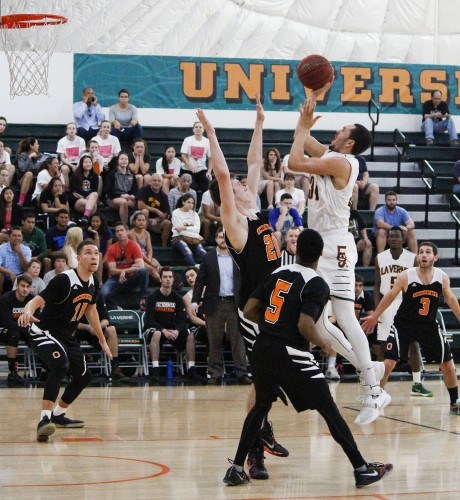 La Verne junior forward Jordan Stokes makes a second quarter attempt toward the basket, as Occidental guards freshman Austin Dewitz and junior Jay Miller defend him to get the stop Saturday at Frantz Athletic Court. The Leopards fell apart in the second half, as the Tigers found a momentum, ultimately slipping away with the win, 74-70. / photo by Kathleen Arellano

After being tied at 38 heading into the second half, the Tigers took advantage of the Leopards’ mistakes and went on a 20-2 run to slip away with the win.

“We didn’t execute the game plan and that one’s on us. We were awful on both sides of the ball,” head coach Richard Reed said. “Credit to Occidental because they came in and kicked our tails on our home floor, and I’m very, very, very disappointed in our team right now.”

The Leopards also fell late in the game to Caltech Wednesday at Braun Athletic Center, 65-61, to extend their losing streak to three.

However, Caltech got its groove going in the second half and slowly cut La Verne’s lead.

The Beavers took advantage of the Leopards’ turnovers and scored on second chance points to seal the win.

La Verne is now 7-7 in the Southern California Inter­collegiate Athletic Conference and 9-14 overall.

In the Occidental game, the Leopards went on an 11-4 run to extend their lead to nine, after a free throw by junior forward Jordan Stokes, with 8:21 left in the second half, 56-47.

With 4:43 on the clock, senior center Brian Stiver put up a floater, to put La Verne up, 58-57, its last lead of the game. Stiver went 4-for-4 and finished with nine points.

The Tigers hit their largest lead of the game, 67-58, after Miller pulled up a jump shot, with less than three minutes in the game.

With 38 seconds left in the game, Stokes put up a jumper to cut the lead to four, 69-65. Johnson answered back with a layup to push the Tigers’ lead.

La Verne junior guard Cruz Mertens hit a shot behind the arc to get La Verne within three, 71-68, with 14 seconds left.

Mertens finished with a team-high 18 points.

The Tigers drew foul after foul and sank their free throws to take the win.

“Oxy came out to play and we didn’t come out and execute our game plan,” Stokes said. “We let a few guys get going and that’s what really hurt us. We were able to stop Jay Miller in the first half. He came alive in the second half and torched us.”

Stokes finished the game with 16 points and five rebounds.

The Leopards started the first half strong, after back-to-back layups by Stokes and back-to-back three pointers by Mertens, to give La Verne a 13-6 lead with 15:23 on the clock. Occidental broke the tie and took the lead, 21-18, after senior guard Spencer Levy put up a jump shot midway through the first half.

“We had the lead and we let Spencer Levy go off in the first, so that killed us,” sophomore guard Anthony White said.

With less than three minutes left in the first half, Stiver found White open for a three, to get La Verne within four.

As the clock ran down with four seconds left in the first half, sophomore guard Connor Head connected with White for another three, to tie the game at 38.

White finished the game with 12 points and nine rebounds.

Despite a game of back-and forth in the first half, and a strong lead in the second half, the Leopards fell apart, allowing the Tigers to find their rhythm.

“We just wanted to keep the energy going from what we had in the first half, and we didn’t bring it as much in the second,” White said.

Reed said there was no change of game plan or mentality heading into the second half because the game plan was not fully followed through in the first half.

“We were able to tie the game and when we took the lead in the second half, all we had to do was go ahead and continue executing what we were doing and we stopped doing it,” Reed said. “We had a six minute stretch in the first half and second half and we didn’t execute what we had to do and it cost us the game.”

With the goal of reaching the SCIAC tournament on the line, Stokes said the team needs to come together as a unit.

“A lot of our downfall came from our execution of our game plan and if we can do that nobody can stop us in this league,” Stokes said. “If we want to go to the SCIAC and win the championship, go to the national tourney, it comes from the heart.”

The Leopards face the Pomona-Pitzer Sagehens at 5 p.m. Saturday at Rains Center for their last road game of the season.