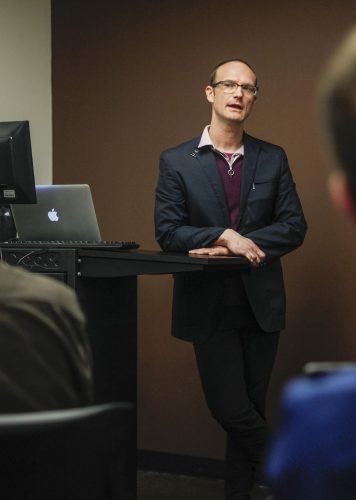 Dion Johnson, director of galleries and distinguished artist, presents on the University’s art collections Tuesday in the President’s Dining Room. Johnson curates the Tall Wall Space, the Harris Gallery and the West Gallery. Johnson received a mention in the most recent issue of ARTnews for his work that appeared in “The World’s Top 200 Collectors.” / photo by Celeste Drake

Johnson began the presentation with a bit of his background of discovering how to take a different perspective on art pieces in the President’s Dining Room Tuesday.

“As I walked by this every morning it didn’t mean much to me,” Johnson said while projecting a picture of an eight-tier sculpture made of cinder blocks on Ohio State University’s campus, where he earned his bachelor of fine arts degree.

“It wasn’t until I took another look at it did I have a deeper understanding and appreciation for it,” he said.

It continued upward until it was one cinder block across and eight cinder blocks tall at its peak.

Wong’s sculpture mimics the same pose of a traditional samurai sculpture, except Wong’s sculpture is riding a creature that looks like a cloud and is equipped with horns of a reindeer, green rain boots, jeans, a jacket and mittens.

“Wong took a more innocent and unromantic angle with this sculpture,” Johnson said. “We can see the geometric shape that is its head is also the same shape and color of the base it stands on. This is supposed to describe and show the ideas and that come up in a child’s mind.”

After comparing three other students’ work he showed where they are currently located, some on walls or displayed on campus.

Two pieces were hung in the Morgan Auditorium because of how they resonated with the performances that happen there Johnson said.

Lorenzo Hurlado Segovia is a Latino artist and layered his canvas with fabric and painted what Johnson describes a musical score.

He put a picture of the piece side-by-side to a still shot of the falling green code from The Matrix films.

“I’ve never noticed the pieces around campus, but i will definitely be more aware of them now,” junior political science major Amy Loebs said.

“It really amazing to see the art that is made by the students here and having it compared with similar works by historical artists.”

The other piece by Eric Zammitt, a Los Angeles based artist, depicted what looked like faded, lightly colored, overlapping clouds, but showed something different up close.

Johnson projected a zoomed-in shot of the thousands of geometrical lines that cover the canvas.

“This really looks like what sound is,” Johnson said. “There are no boundaries on how to make art and Eric used mathematical shapes to create something original.”

The crowd of 24 students and faculty members, including University President Devorah Lieberman, used this time to thank Johnson for the hard work he has put into the University’s art galleries.

“This campus would not be the same if it were not for the work that Johnson has done with the art community,” Assistant Professor of Public Administration Matthew Witt said.

Johnson has also helped curate art currently in the University House that was donated by Professor of Health Services Management Kent Badger.

“I’m lucky to be able to have the resources to continue to collect art,” Badger said.

“I’m happy to work with Johnson, and share the pieces for others to appreciate and experience,” he said.

“I hope the audience left today with a new way to look at art,” Johnson said.

“There is an interaction that can happen between an art piece and the viewer, and that is where the viewer can truly appreciate the work.”