By Celeste Drake, Nicolette Rojo on September 21, 2018 in News 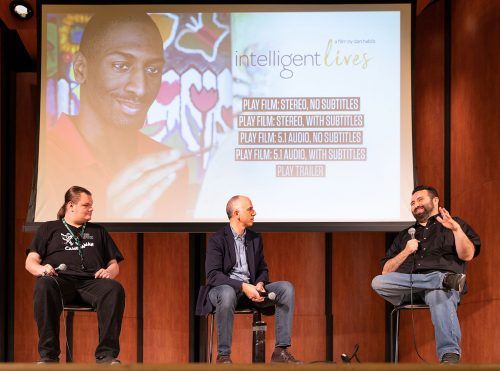 Alumnus Wyatt Wipperman, filmmaker Dan Habib, and David Austin discuss the experiences of Asperger syndrome, dyslexia and autism after the showing of Habib’s “Intelligent Lives,” a documentary on three people with intellectual disabilities. Habib made the film to give hope to people of all abilities pursuing a higher education, meaningful employment and true relationships with others. This panel discussion is part of the LaFetra College of Education Social Equity Lecture Series. / photo by Celeste Drake

The Center for Neurodiversity, Learning and Wellness hosted a screening of “Intelligent Lives” for more than 75 students, faculty and the community members Sept. 13 in Morgan Auditorium.

The event was part of the LaFetra College of Education Social Equity Lecture Series, which focuses on social justice and a specific group for each lecture or event.

“A big theme in this film is that there is no one way to show your capacity, your potential or your ability to contribute to the world,” Habib said.

According to the documentary, 17 percent of students with intellectual disabilities are included in regular education courses nationwide. Only 40 percent of these students graduate high school by age 21. And their employment rate is 15 percent.

Habib said his inspiration for the film started after his previous films discussed specific intellectual disorders to demonstrate that anybody can get an education and a job, and can have meaningful relationships.

Academy Award-winning actor Chris Cooper narrates the stories of the three main characters by adding an anecdote about his son Jesse, who had cerebral palsy and died after a seizure in 2005.

Following the screening, a panel shared stories and discuss the characters and their lives with the audience.

Austin focused on his 11-year-old son, Logan, who is autistic.

“The film has given me a lot of hope, because I know he can go to college and wants to go,” Austin said.

“These guys had their dreams come true, so I think it’s something that’s achievable.”

Wipperman pointed out the relevancy to the characters’ challenges as they transition into various stages of their lives, but explained how his journey through school was different.

“Seeing other people’s struggles with other types of disabilities, like me with Asperger’s syndrome, makes you evaluate what you’ve gone through,” Wipperman said.

Austin said that he is concerned for his son’s future because of his disorder, noting the difficulties the film’s characters go through on a daily basis.

“I’m not sure if Logan would ever live on his own,” Austin said.

“That’s one thing my wife and I have always worried about what’s going to happen because you never know with autism and how far he’ll be able to go,” he said.

“I was able to learn different techniques from the film and was able to briefly speak to Habib himself,” Callahan said.

“Being able to watch this film has not only impacted my life, but the process in which I’ll be teaching my future students.”

Kenny Kinecki, parent and graduate student, learned about the screening through an invitation from Associate Professor of Education Pat Taylor.

Kinecki said he saw the film as an eye opening and capable of educating people unfamiliar with intellectual disorders.

“People should be more interested in possibly doing their own research because every person knows someone that has a form of a disability,” Kinecki said. “This film is perfect to get that spark going.”