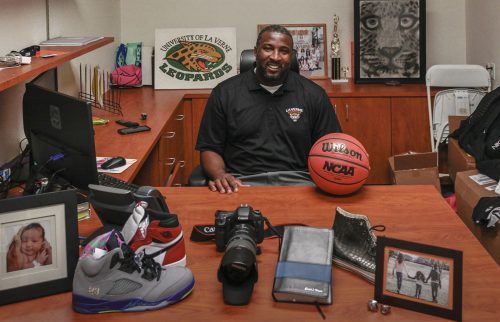 La Verne’s newly appointed women’s basketball head coach Jason Pruitt is a proven winner. Pruitt won the California Pacific Conference title this past season with the University of Antelope Valley. In addition to coaching, he spent nearly a decade in the broadcast journalism field at various CBS, NBC and ABC TV affiliates. The women’s basketball season kicks off Nov. 15. / photo by Celeste Drake

Pruitt was named California Pacific Conference Coach of the Year last season while at the University of Antelope Valley.

“It was a hard decision, at University of Antelope Valley I lost two seniors from the previous year’s team so before I left I was actually blessed enough to put together the number one schedule in the country, so they will open up with seven division ones this year,” Pruitt said.

Before arriving at Antelope Valley, Pruitt spent three seasons as the head coach of Bethesda University. He ended his time at the program. Finishing the season ranked in the top 10. That year, the Lady Flames finished the season as the NCAA’s third highest scoring team and led the country in rebounding, while also being ranked top 10 in the nation for the entire season.

Pruitt was also named NCAA Western Region Coach of the Year for the second year in a row.

When Pruitt heard that La Verne would have an opening he reached out to the University himself.

He managed to recruit one of his former players from Antelope Valley to come play for him at La Verne.

“Coach Pruitt has given me many opportunities on and off the court,” junior point guard Clarissa Perez said.

“He’s put me in a position where I can succeed, personally and on the court. I just like the passion he has for the game, I like how he uses his resources to help us in the classroom and on the court; he’s very giving,” she added.

Perez was part of the Pioneer team when it won the CalPac under Pruitt and went 32-6 overall that season, and hopes to help build a winning atmosphere at ULV.

He will not have access to his players until Oct. 15, while the team is currently hitting the gym doing strength training. The first game of the season is scheduled for Nov. 15, which will give him one month with the team before they face California Miramar.

“We’re so used to it, the past two years that I’ve been here we’ve been doing open gym on our own, I think most of us are motivated so I think we’re working on our game to prepare us for Oct. 15,” junior guard Bailey Kurahashi said.

Prior to starting his coaching career, Pruitt worked in the media, spending nearly a decade in the industry where he worked as a manager, producer, editor and videographer at various CBS, NBC and ABC TV affiliates.

Pruitt has also taught multiple courses in digital journalism, media technology, communication and sports marketing at high schools and colleges. His experiences as a player, academic teacher and as a coach come as a benefit to the women’s basketball program at La Verne.

He is still involved with TV, and is also a consultant for the Glendale Unified School District, where he helps build all the digital media curriculum for the high school programs, while also freelancing for the city of Beverly Hills TV.

“Given our previous record, we are all in need of something different, so I think it will be good for us. With a new coach it feels like we can have a new beginning to kind of start over and start fresh, the past is behind us, it’s just all about moving forward,” she added.

“I’m really excited,” Pruitt said as he is in it to win it at La Verne. “This is a new chapter in my life and it’ll be a new chapter for this team. I know in the past that there’s been some ups and downs, but hopefully we can get this program on the right path.”