By Claudia Ceja, Megan Hines on October 5, 2018 in Sports, Volleyball 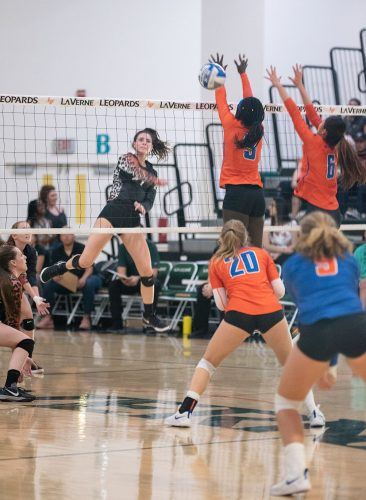 Freshman outside hitter Haley Celaya scores a kill in the first period against Pomona-Pitzer Tuesday night. Celaya had eight kills and four digs overall, contributing to the win for the Leopards. The Leopards’ will host the Leopard Invitational Friday through Saturday. / photo by Claudia Ceja

The Leopards kept their momentum up throughout their matchup with Pomona-Pitzer to secure a 3-0 sweep of the Sagehens Tuesday.

La Verne faced a Southern California Intercollegiate Athletic Conference powerhouse in Pomona-Pitzer and more than held their own as the Leopard faithful supported the team at Frantz Athletic Court.

The Leopards had to have all hands on deck against the Sagehens, who kept La Verne on their toes, to pull out this win.

Pomona-Pitzer jumped out to an early 2-1 lead with kills by junior outside hitter Isabel Kelly.

La Verne made plays to get themselves in the game and tie at 3-3 with a kill by freshman outside hitter Haley Celaya then an attack error by the Sagehens’ junior middle blocker Vicky-Marie Addo-Ashong.

Celaya ended up giving the Leopards a one-point lead with a kill, 4-3. The Leopards steadily built a lead on a 4-1 run as they hustled and minimized their mistakes.

“We’ve been putting a lot of focus on the little things and the point-by-point stuff,” senior outside hitter Kelsie Sievers said.

Celaya said that the team realized that they had to give 100 percent on the court.

The Sagehens kept themselves in the set as much as they could even when La Verne made errors in the set with a service ace and an attack error on junior outside hitter Darrah Jones to bring Pomona-Pitzer within one at 14-13.

Jones’ kill for the Leopards gave them a two-point edge 15-13 and a momentum builder to finish out the set.

The Leopards hustled and sacrificed their bodies on plays to keep the ball alive yet the Sagehens found their way back in, leading 16-15 with a kill by freshman outside hitter Chloe Kerstein.

Pomona-Pitzer was up late in the first set 20-19 after a kill by freshman outside hitter Gaby Harrison. Sievers spearheaded a 5-2 run that helped La Verne take the set 25-21 in comeback fashion.

The second set got off to a good start as Teagan Griffiths, senior defensive specialist and libero, had an ace that gave the Leopards a 6-1 lead.

Once again, the Sagehens got themselves back in the game, 6-4, on a service ace by Griffiths, then took the lead 9-8 on a Harrison kill.

The Leopards did not waver and continued to make plays.

Junior setter Madison Maynes got a kill for a 12-10 lead. Both teams were not allowing each other to make long runs, staying close enough to come back.

La Verne kept the ball alive to extend their lead with contributions from senior middle blocker Katelyn Winiecki to give the Leopards a 16-12 lead.

The Sagehens tied the game at 16 with a kill by Kerstein but Maynes followed with a kill that started the Leopards’ 8-3 run to take the second set, 25-19.

La Verne was playing very well at the end of sets, and this helped them capture the first two and look for the sweep.

The Leopards dominated the third set. A highlight play was a Sievers kill to give the Leopards a 10-point lead, 17-7.

“We were really determined to take them out knowing they had a really good record,” Jones said.

La Verne will host the Leopard Invitational this weekend. On Friday, the Leopards will face UC Santa Cruz at 2 p.m. and DeSales at 7 p.m. On Saturday, they will match up against UMass-Boston at 12:30 p.m. and Nazareth at 5:30 p.m.