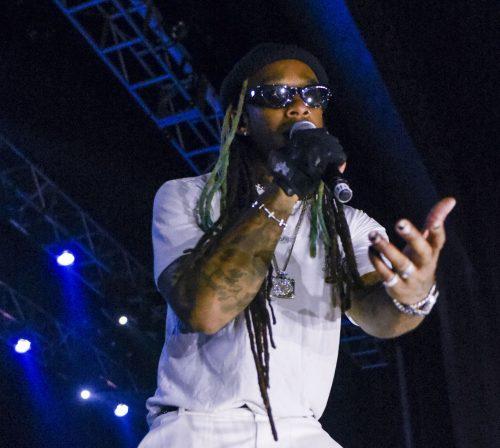 Singer-songwriter and rapper Ty Dolla $ign headlines the eighth annual LaVernapalooza concert May 10 at the Fox Theater in Pomona. More than 100 La Verne students danced and sang along to “Paranoid” and “Blasé,” among other favorites. Ty Dolla $ign shared the stage with opening special guest Travis Porter to start off the concert. / photo by Claudia Ceja

LaVernapalooza, the event students prepare for every year as the biggest party thrown by the University, seemed to once again go by in a flash May 10 at the Fox Theater in Pomona.

The entire theater darkened for the headliner Ty Dolla $ign, while students ran to their spots, trying to get in position for the best view.

The beat to “Paranoid,” came on, and everyone put their phones in the air to document the main act on Snapchat. Halfway through his set, Ty Dolla $ign asked the crowd, “Who wanna come smoke a joint with Ty Dolla $ign tonight?”

“Imma find the most lit person to come smoke with me.”

Security guards started pointing to audience members, letting two students in the pit up on stage.

Molly Jauregui, sophomore neuroscience major, danced on stage with Ty and hit his joint when he passed it to her.

“I was ecstatic, I felt so alive,” Jauregui said after getting off stage.

During the last song, “Blasé,” Ty told the audience to jump to the ceiling.

The audience got hyped when he splashed a bottle of water over the pit.

“I had a great experience, except when Ty Dolla $ign got water on my phone,” senior kinesiology Kayla Chism said.

Chism stood right in front of the stage all night, getting the most of the spew.

Four streams of steam shot up from the front of the stage, mirroring the jumping audience members. Ty Dolla $ign beckoned the audience to move in closer, then dove into the crowd and surfed students heads and hands.

The concert was opened by rap group Travis Porter, which was announced only a couple days before the performance.

The group started with their older hits like their debut single, “Make it Rain.” People grooved to some unfamiliar songs until the group teased the crowd with a few seconds of their 2012 hit “Ayy Ladies,” cutting it off and rapping the hook a cappella one time before dropping the beat again.

The DJ played songs by other artists’ songs like “Salt Shaker,” by Ying Yang Twins during the rappers’ set to get people moving.

Travis Porter interacted with students, rapping directly to cameras for Snapchat and posing for selfies with students near the stage.

Some people ducked while others embraced the occasional stream of bottled water spewed on the crowd by one of the rappers.

Audience members flocked to the bars and restrooms during the about 20 minute intermission between performers.

“Its cool; not what I thought (it would be) but it might get better,” sophomore business administration major Tyresha Willis said during the break between artists.

Mariecia Miller, junior business administration major, said she expected to be in the pit as a student.

Even with a free terrace ticket, she was willing to pay the guest price to watch the show from the pit.

Pit tickets are only distributed to undergraduate students and terrace tickets are sold online for non-student guests.

She said that everyone in the terrace was just standing around.

“It seems like everyone down there is more lit,” Miller said. “I want everyone to be dancing.”

The University always hires a charter bus to transport students to the event.

This year, two trips to the venue were offered instead of the usual constant shuttle.

“I was confused as to why they were trying to only do two shuttle times,” junior creative writing major Cheyenne Avila said.

This change would have expectedly caused an overflow of students on the bus, but it turned out that the expectation of a full bus caused many to find another ride.

“It seemed like there was less people than other years,” Avila added.

The event ended at 10 p.m., when security started shooing students out of the area. Students dispersed in groups to after parties at frequent party spots for La Verne students.