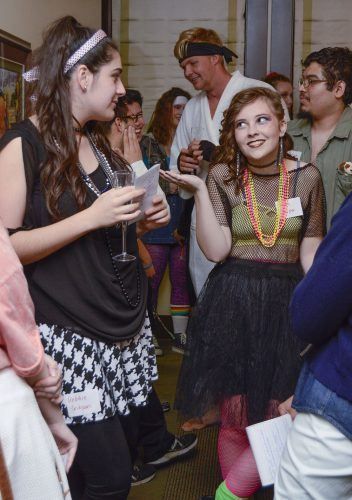 A pile of name tags waited to be paired with their character, all oblivious to whom committed the murder at the University of La Verne Board Game Club’s murder mystery dinner Thursday night.

When Alligator Dundee appeared sprawled across the floor pale faced with a “victim” card taped to his chest, everyone took closer looks at whom killed him and why.

Guests chatted and began to build their suspicions of the motivation of Dundee’s murder.

“I threatened to kill alligator Dundee if he made any more negative comments about my new fragrance in public, but I didn’t follow through,” Debbie Gribson, played by junior psychology major Hanna Blankenship, said to defend herself. “I have way too much to lose with my new album release.”

The host, Janet, played by co-president of the Board Game Club Andrea Dukes, invited the 1980s Hollywood elite to her home to celebrate Gribson’s new album and perfume line.

A disco ball balloon greeted guests into the Hanawalt House’s foyer. Tye dye, blue, red and purple balloons glowed against the walls and sway from the chandelier.

During round one, everyone opened their individual envelopes and studied facts about their character; some they were encouraged to share and some to keep secret.

“I thought this was your album release party?” Lindy Lauper, played by sophomore educational studies major Darian Kuhn, said to Gribson when her own song, “Girls Just Wanna Have Fun,” started playing.

Junior criminology major and treasurer for the Board Game Club Briana Cerda, or Lany Lou Metton, said she was not originally going to play the game but figured she should get a character to keep the game’s flow consistent.

“There was a lot of new faces this year,” Cerda said.

She added that the club’s goal is to do a big event every semester, and growing interest in the club shows that success is not far-fetched.

Sophomore business major and Board Game Club co-president Anna Roberts said that the Club’s annual events, the murder mystery dinner and a board game tournament, were put into action last year.

“We didn’t do events or club fair, just weekly meetings until last year, so no one really knew we existed,” Roberts said. “We’ve got to get out there.”

In the dining room, the 24-seater table was set with gold paper plates and silver plastic forks.

Each place setting consisted of an envelope with at least one rhinestone in the top left corner and respective names in the same pink writing as the name tags.

After speculating in the adjacent room, the party guests returned to the dining room to unfold the murder.

Polly Abdul, Wee Pee Vermon, Dundee’s ex-girlfriend Toni Oregano and Lindy Lauper were revealed as suspects per fingerprints on the murder weapon – a Rubik’s cube, Molly Mingmold started the conversation with a confession.

She could no longer take Plucky mocking the tiara she would never take off, saying “I told you so,” after Long Duck Dundee, Alligator’s brother, stood her up for the prom, killing her chance of becoming prom queen. So, she had to kill him.

She had an ongoing obsession with Rubik’s cubes, but was not responsible for the one lodged in Alligator Dundee’s temple.

Esquibel, or Mingmold, joined the Gamers Guild as a way to get involved on campus.

“This is the first event we’ve been to at La Verne,” Esquibel said. “I’ve always wanted to do a mystery dinner.”

She added that she loves ’80s movies and was excited to play a character that she admired on television.

Oregano said Dundee left her for a field journalist while in Australia.

It made her want to get revenge by bettering herself, but not angry enough to kill him.

Lindy Lauper closed the investigation when she said that Dundee witnessed her placing an order for Mogwai burgers, an illegal meal of children made into meat before they turn into gremlins.

He blackmailed her for $5,000 a week, which she could not afford.

“When he left the party room I followed him and bashed the Rubik’s cube in his head,” Lauper said.

“Call the police and put me in jail; at least I’ll be protected from animal rights activists.”

Stories of the Meshika
Mixed mediums demonstrate life in the woods