By Damien Alarcon, Ian Gratz on December 10, 1999 in Sports, Volleyball 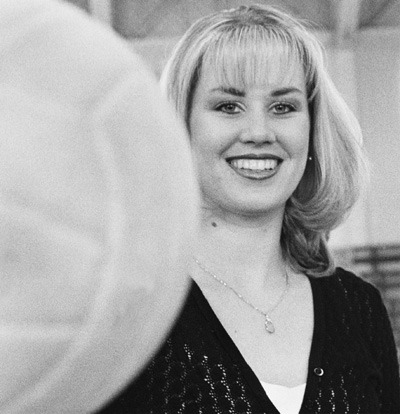 Junior Amy Brummel has emerged as the premier women’s volleyball player in SCIAC during the 1999 season. Despite all the hours she puts in working at Outback Steakhouse and The Claremont Club, Brummel still finds time to dedicate herself to school, and to the sport of volleyball. Although Brummel is disappointed in not winning the SCIAC Championship, she is proud of her personal accomplishments. / photo by Ian Gratz

With numerous awards and trophies accumulated throughout her life, being named Southern California Intercollegiate Athletic Conference (SCIAC) Player of the Year should be anything but surprising to junior Amy Brummel.

Being the person that she is, she doesn’t overlook any feats pertaining to the sport she loves.

The 6’0″ outside hitter received the title after completing the 1999 volleyball season, in which the Leopards finished with a 15-7 overall record, and in second place in SCIAC at 9-3.

“I was pretty surprised,” said Brummel, who is from Alta Loma. “It was a great thing to get because it tells you that hard work does pay off.”

Hard work and year-round training is what enabled the 20-year-old to serve as this year’s co-captain.

During her earlier years at Alta Loma High School, Brummel picked up First-Team All-CIF honors in her junior and senior year. In her senior year, she also was selected to the All-Inland Valley squad by the Daily Bulletin newspaper. Last year as a sophomore, Brummel made Second-Team All-SCIAC.

Many athletes believe that receiving a conference MVP award is the greatest accomplishment one can hold. For Brummel, however, she firmly desires to be successful in the bigger picture.

“I will take a National Championship over this award any day,” said Brummel. “Yeah it is a high honor, but to make All-American or to be national champions would be better than conference player of the year.”

An important figure in Amy’s life who is familiar with national championships is her boyfriend, senior Sean Douglas.

“Amy doesn’t put herself first. To her, it would be more important for the team to win than for her to be the best player on the team,” said Douglas, who was co-captain on last year’s National championship men’s volleyball team. “She would turn away any individual award for something better for the team.”

Douglas also works out in the weight room with Brummel, but says he has no need to push her to work harder because of her “internal motivation.”

He said Amy “has great determination, great drive and perseverance. Amy has always had an internal confidence.”

Amy credits her dad for her athletic ability and drive. In his younger years, he played basketball throughout high school and college

As time went by, Brummel eventually brought softball and basketball to an end. She quit playing softball after her freshman season of high school and stopped participating in basketball by her junior year to focus more on volleyball.

Volleyball has never been a seasonal sport for Brummel. Other than playing for the Braves, she played on club teams in the off-season to improve her performance and because of her love for the game.

Because of the age limit that goes with participating in clubs, Brummel stopped her involvement in them after high school. At the University of La Verne, she is either training with the team, under head coach Don Flora, or on her own.

Where does Brummel get her motivation? Who pushes her to succeed? Is it her parents or three brothers?

Brummel’s dad did not even expect Amy to be involved in sports.

“Certainly I thought my boys would be more of the athletes and my daughter more of a dancer,” he said.

“It is not like someone is telling me, ‘You have to do this, you have to do that,’ ” Brummel explains. “I do things for myself because I love the game.”

Brummel, a business administration major, is uncertain of her future plans as far as careers are concerned. She is definitely planning on attending graduate school after completing her four years at La Verne.

“She never gives up and she works very hard,” said Adriana Contreras, who plays middle blocker for the team. “She makes all of the kills.”

Brummel had the opportunity to play volleyball out of high school at the Division I level, but decided to stay closer to home.

“My family is a big part of me. My mom [Laura] and my dad have always loved watching my games,” Brummel said. “To take that away from them would mean too much to me.”