By Ian Gratz, Michael Anklin on September 24, 1999 in Sports, Weightlifting 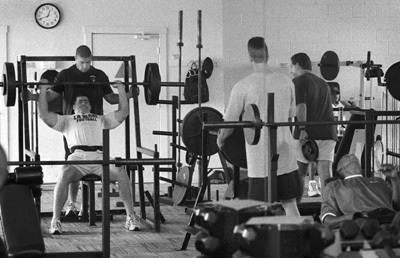 The Hanawalt Fitness Center has seen a number of changes in the last six months. Equipment upgrades include Hammer Strength machines, and free weights, which cost about $72,000. There will be an outdoor section of the weight room where the free weights will be located. The Athletic Department hopes the project will be completed by Oct. 1. Sean Bettencourt spots Brian Brew as he cranks out one more rep on the shoulder press. / photo by Ian Gratz

The renovation of the Hanawalt Fitness Center, featuring new and improved equipment and an outside weight lifting area, is in its final stages.

Jim Paschal, athletic director at the University of La Verne, said of the renovated facility, which was financed through fundraising, “It’s up to date, it’s modern, it’s very safe.”

The manufacturers of the new equipment include well-known companies such as Hammer and Maxicam.

Assistant football coach Mark Potocki, who initiated the change, said, “Hammer Strength is, in terms of risk management, the safest machinery out there. It is more expensive than some other types, but we went with quality instead of quantity. It’s still a full weight room. You can do anything.”

Besides new weightlifting stations there are new fitness machines to train specific muscles or to do a whole body workout, like a pullover machine, a shoulder press machine and rowing equipment.

The equipment has been provided by ExecuFit, who also consulted the Athletic Department in planning the new fitness center.

Potocki said ExecuFit was chosen “because they were the best. We took bids from five different companies. ExecuFit was the most expensive but also offered the best quality.”

Said Paschal, “When we attempt to sell our institution to potential students and potential athletes, and when we’re recruiting, I think we compare very well with any weight room in our conference now.”

He said previously coaches avoided taking recruits to the Hanawalt Center “because it was a pitiful weight room.”

Junior criminology major and football player Damion Silva was among these recruits. Despite the weight room’s former condition, Silva transferred to ULV. He had been told about the renovation and likes the way it turned out.

“It is a lot better than it was last year,” said Silva, who is an offensive lineman for the Leopards. “We have machines for every part of our body.”

“It’s a good weight room I can’t wait until they put the [lifting] platforms in,” said the business major and La Verne linebacker.

“If you have good equipment, it changes your attitude about what you are doing.”

Athletes were not the only reason the fitness center was renovated. The improvements were made to make it more useful for movement and sports science classes and more attractive for students, faculty and staff.

“It [the new equipment] is best in terms of training for both males and females,” said Potocki. He said gender equity was an important issue when the renovation was planned.

“In the past the weight room has been really just for athletes,” Potocki said. “It has been a kind of intimidating place. With this new machinery I think it is going to be much better for the entire student population, faculty and staff.”

The equipment in the outside area is going to meet the needs of athletes and advanced weight lifters Potocki said. The machines inside are designed for use by anyone.

“We try to run it like a real fitness center,” said Paschal.

Students who want to use the facility are required to deposit their ID while they are working out, and to sign in. They are also asked not to bring bags because of the limited space available.

The Athletic Department depends on work-study students to run the center during its opening hours, which are from 9 a.m. to 9 p.m., Monday through Friday. While these students may not be qualified to advise people on an individual basis, Paschal said the department hopes to “provide clinics on an occasional basis, so that people can get oriented on what they are doing.”

Potocki said he would design a work out program for anyone who is interested.

The renovation was scheduled to be completed on Aug. 15.

“We got held up on our permits a little bit,” said Paschal, “because the design that we had wouldn’t pass the standards that the city or that the building code requires.”

The plans had to be reviewed and changed. Paschal talked about an additional cost of about $15,000 caused by the changes.

“In the long run we’re going to be better off,” he said, “because we’re going to have a normal roof or ceiling above us which will last for a longer period of time.” Another advantage of the new ceiling will be that poles, which were going to hold up the original ceiling, will not unnecessarily take up space.

The extra cost does not cause too much of a headache in the Athletic Department. The fundraising goal of $50,000 was exceeded, with more than $70,000 collected.

“The response was overwhelming,” said Paschal. “It is much easier to raise money if you have a specific project that people know they are going to contribute to.”

Two especially generous contributions were made by alumni Lou McMurray and Anthony Scafani, who gave $20,000 and $10,000, respectively.

As a result of their contributions the renovated rooms are going to be named ‘McMurray Family Room’ and ‘Anthony P. and Jesse Iles Scafani Room.’

The Associated Student Federation (ASF) Forum contributed $5,000 to the renovation.

“The Hanawalt Center [contribution] is just one example of ASF’s continuing commitment to athletic programs at the University,” said ASF President Justin Jones-Rodriguez.

“We just appointed a commissioner for intramurals and athletics; we helped building the gym floor in the past,” said Jones-Rodriguez. “It’s a commitment that we will be continuing throughout the year.”