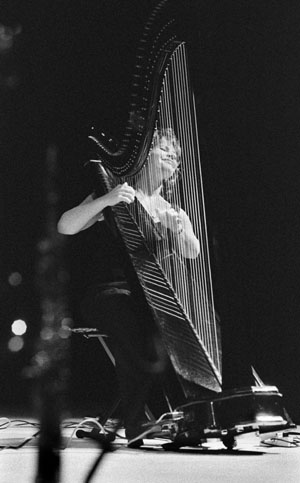 Despite its reputation, Lori Andrews showed that harps are not only for producing sweet, angelic music. Playing a wide variety of songs by Chick Corea, Horace Silver and a number of her own tunes, Andrews entertained and amazed Saturday night’s crowd with the versatility of the electric harp. She was joined by three other musicians on saxophone, bass and drums. The free concert was held in Dailey Theatre for anyone interested in attending. / photo by Ian Gratz

“Funky” and “jazz” are not the words used to describe a harp, but with Andrews’ exuberance and eclectic fusion of jazz, she eliminated any preconception one may have about the harp.

The quartet consisted of an equally and vastly talented ensemble that included George Shelby, saxophone, who has performed with artists such as Melissa Manchester and Brian Setzer; Bart Samolis, bass guitar, whose music has been featured in the movie “Swingers,” and on television shows such as “Dawson’s Creek” and “Party of Five;” and M.B. Gordy, drums, who has worked with artists such as Frank Zappa, John Tesh and Three Dog Night.

Together for the past eight years, the quartet has performed in various jazz festivals and has been a regular act at the Warehouse in Marina Del Rey.

Andrews has been named the third top jazz harpist in the world by Jazziz magazine. Her music has been featured in both movies and television. She has also performed for President Clinton, and the King and Queen of Spain.

Playing the piano since the age of 6 helped Andrews when she tried out for her high school orchestra. A teacher recommended she play the harp because of her piano background, and thus began her love for the harp.

“As soon as I sat down and played it, I thought, ‘This is way cool,’ ” said Andrews.

“I love rhythm and I was really missing that in classical music, I would be playing classical music by the day and boogying at night so I found a way to do both.

“I actually developed a technique on the harp where I slap the bass to set up the rhythm, therefore it gave me the opportunity to be rhythmic on the harp and then the band came long after that,” she said.

While witnessing the treat of Andrews’ performances, one can see the passion she has, as she closes her eyes and glides her fingers across the strings with ease as she gives life to a jazz explosion of music never heard.

“It was fantastic, it is a very special thing to get to see Lori Andrews play the harp in such an unusual and beautiful way,” said Dr. Reed Gratz, professor of music.

Many audience members were astonished by the variety of styles of jazz the quartet accomplished. Along with standards and songs from its five albums, included was a solo written by Andrews entitled “Suspended” and an upbeat spastic, unique interpretation of Dave Brubeck’s jazz classic “Take That! (Take Five).”

“I can’t believe that a harp can make that music, what I thought of a harp was lilting kind of beautiful little notes, and here she is jamming,” said senior theatre major Jessica Wotherspoon.

Throughout the concert, the quartet included the audience with its exuberant energy, while Andrews shared anecdotes and educated the audience on playing the harp.

After the show, audience members were able to purchase their CDs, have them autographed and have the chance to talk with Andrews.

Fans of the Lori Andrews Jazz Harp Quartet and people interested in seeing it perform live will have a chance tomorrow when it performs as one of the headline acts on one of the three stages at the newly-opened Staples Center in Los Angeles.