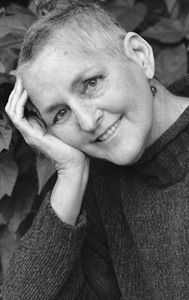 Jane Dibbell, associate professor of theater arts at the University of La Verne, has been able to touch the lives of countless students and faculty during her career as an actress and instructor of the art of conscious acting. Since being diagnosed with metastasized breast cancer, Dibbell has learned to appreciate each day and each breath of her life. / photo by Ian Gratz

by Araceli Esparza
Editor in Chief

In a world that views terminal illness as painful and heartbreaking, individuals such as Jane Dibbell prefer to take on the perspective that the experiences may also be a blessing.

“Having a terminal illness is a gift, and you have time,” she said, “because it helps to create a community of people who come and share their love and can get close to a person who’s dying.”

Dibbell, an associate professor of theater arts at the University of La Verne, was initially diagnosed with breast cancer 17 years ago. She remained in what medical officials called “a long remission” until October of last year, when she was told the illness had metastasized-or spread-to her spine and lungs.

In the short time following the pronouncement of her initial condition, Dibbell became distant from those who surrounded her life.

“I didn’t trust people very much; I didn’t think I was deserving of love,” she said. “I pulled away from everybody and denied everything.

“But when I put my head down to the pillow, I would get these rushes of terror.”

It took a series of such moments of fear to serve as Dibbell’s wake-up call to the world. She realized, at that point, that she wanted to accomplish things she had previously put off, including the chance to “really become a teacher and use theater in a way that encouraged social change.”

The opportunity to serve as an instructor of drama came for Dibbell 12 years ago when she was hired to work in ULV’s Theater Department. It was at the University that Dibbell found the nurturing and encouraging environment for which she longed as an actress.

“She brought a very strong, feminine energy and a very loving energy that has formed everything that she’s done in her teaching, in her directing, in her counseling and in all of her collegial relationships,” said Dr. David Flaten, chair of the Theatre Arts Department.

“Jane has always been so aware and so careful to be inclusive and to have tremendous empathy that she has for people who might have felt like outsiders.”

Dibbell continued in this role until she eventually went on medical leave in January. Prior to her leave, however, the actress/educator experienced what became a turning point in her dealings with cancer and perhaps the rest of her life.

“While I was in New York [last December], I wanted to have my whole family go to a show, and I couldn’t get tickets to any other show,” said Dibbell. “The only tickets I could get was for ‘Wit,’ and I really didn’t know what it was about.”

A play about a woman’s battle with ovarian cancer, “Wit” was written by Margaret Edson. Its protagonist used emotions of anger, humor, pain and isolation-which often accompany a terminal disease-to give a realistic and personal insight to the battle against cancer.

“All of us were just stunned, and it was a chance for me and my daughter to just weep together,” she said. “It opened up so many channels for everybody in the family to be able to talk about anything they wanted to talk about.”

“Wit” had such a profound effect on Dibbell and her immediate family (35-year-old daughter, Dominique, and son, Julian, 36) that, for the first time in a while, she was able to speak openly about her condition.

It was this leap in her life that encouraged Dibbell to readapt “Wit” as her own performance for the local community. Therefore, on Oct. 12, she took to the Cabaret Theatre with other actors to present the personal account of a terminal disease and to help others deal with the issue as well.

“I wanted to demythologize the taboos about cancer and dying,” Dibbell said. “It was like anybody else going through life.

“We get up every morning, and we breath in and breath out and do our job.”

Dibbell’s performance was met with an overwhelming audience turnout. She noted the event as one of her best moments since battling cancer, because “an actor’s dream is to have an audience of people who know you and love you.”

Dr. Flaten said Dibbell’s performance opened the eyes of its witnesses. “I think Jane opened dialogue about all the issues that are too frightening that we can’t talk about. She knew what she was doing was important, and she did it.”

Since the ULV performance, Dibbell has worked at getting the most out of every day-just as she has done since regaining her love for life and a personal sense of wit. She has learned, within herself, to listen to life around her and hear what she is supposed to do from day to day.

“It is gorgeous … forcing me to live in the present. I get the privilege of having time to do what I’m always trying to do-that is, to get closer to any human being here,” Dibbell said, adding that she has helped rebuild bridges between others.

“I saw that people were coming to my house and they were making connections with each other; so I was helping to create community there,” she said. “I’m very glad to be a catalyst for that.”

Yet in light of the positive, personal effects a terminal illness may have had on Dibbell and on those who surround her life, she admits there are also challenges to battle.

“The frustrating part of this illness is, in August, I was feeling fine; and two weeks later I was in the hospital,” she said. “That’s the thing I don’t understand. You’re going along and then something happens and it’s odd; it’s not anything you can anticipate.

“You only know that it’s [death] is coming, but how it’s going to happen-how long, how short-no one knows.”

Dibbell said she has come to terms with the fact that she can no longer do everything on her own. She said these struggles can be trying on those who help take care of her as well.

“Sometimes it gets frustrating for my daughter because she is doing such a beautiful job at taking care of me. But it’s very hard for her to realize that she has to go on,” said Dibbell. “And I’m not going to be going with her.”

Currently, Dibbell is at a good stage in her physical health. At times, she has had to depend on an oxygen tank to help with her breathing, but she said she has been physically stronger for the past few weeks. She is now walking, compared to a time in which she was confined to a wheelchair.

For the most part, she said she tries to end each day well because of the unpredictability of a terminal illness.

“I say I love you every day,” she said. “And it’s easy to really forgive myself, just reach for myself. But I think I still have work to do in saying goodbye.

“There’s a sense that life goes on even after this life and that anybody who I’m in touch with now, I’ll be in touch with throughout their life.”

In the News
Authorities should legalize marijuana