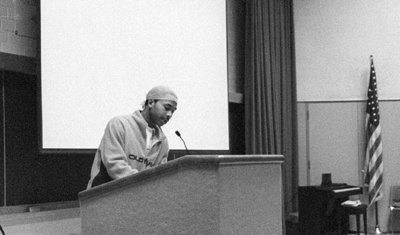 African American Student Association member Wilford Claiborne, a freshman, represented Sydney Poitier at the Griot Monologues earlier this month. He stood in for Will Lawson who could not attend. Each of the students retold a person’s history in an African tradition that is more than 1,000 years old. / photo by Amy Babin

“Our goal is to educate people on the accomplishments of African Americans,” DeJurnett said.

The griot has traditionally been a respected African storyteller, musician and minstrel, DeJurnett said.

He or she is informed and educated, and entertains his people through the retelling of the community’s and ancestor’s history.

The griot tradition has been passed down from one generation to the next for more than 1,000 years.

In today’s world, which is dominated by multimedia, the griot style of storytelling continues many traditional forms.

The University’s March 20 performance of the Griot Monologues began with a greeting by DeJurnett.

Then the audience and performers stood for the National Black Anthem, sung by Lakia Sims.

The National Black Anthem, “Lift Every Voice and Sing,” was written in 1900 by James Weldon Johnson. 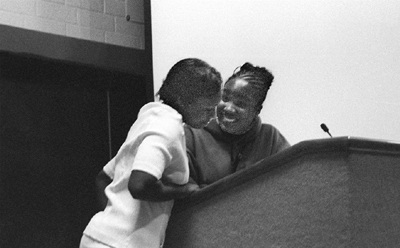 When Woodson graduated from Harvard with his Ph.D., he was disturbed to see that history books often ignored African American history. Woodson fought to have an African American presence in the education of students around the country.

“I had never heard monologues before, and I was curious to see what it was like,” said Krista Davis, freshman in marketing.

“I learned a lot more about black history than I thought I knew,” Davis said.

“I felt it on a more personal level because it is like they are talking directly to me,” Davis said.

“But we wanted to educate people on the lesser-known names that also had a strong impact on the world.”

DeJurnett broke up the series of monologues by asking the audience African American history questions.

Those who answered the questions correctly won free tickets to upcoming events, including the AASA fundraiser fashion show scheduled for 7:30 p.m., April 4 in Founders Auditorium.

AASA’s celebration of Black History 2003 has included a number of events, including skate night, the poetry slam, games night and the talent show.

Americans started celebrating African American history and accomplishments in 1926, before segregation was outlawed in the United States.

Even though February is traditionally Black History Month, AASA will continue to host African American educational events through the end of the year.

Upcoming events include the Gospel Fest at 6 p.m., Sunday in Founders Auditorium and the AASA fashion show for $3 with a student ID and $5 general admission.

“These events are all about going back and discovering our roots and learning about people from the past as well as the present,” Claiborne said.