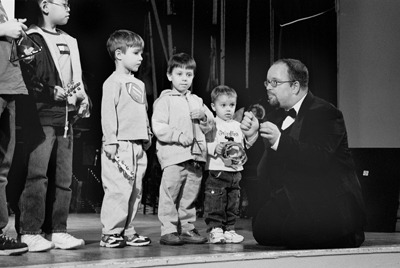 Kevin Truong, Christopher Kechichian, Sean McJunkin and Alex Kechichian joined Scott Farthing center stage to help in the performance of “The Trolley Song.” The Kid’s Club Concert was held in Founders Auditorium on Saturday. The University of La Verne Choirs included the young audience in a musical performance. / photo by Amy Babin

The music department put on a special performance for the children throughout the La Verne community, and invited them to interact with the University chorale group.

“It is a concert to expose children to the choir, music and the world of singing in a choir,” said Brianna Roth, music major.

This was the first year that Scott Farthing, music department chairman, has conducted this type of concert.

The children in the audience had the chance to experience fun that theater and music can bring to their lives.

They got to interact and participate in many types of activities.

“It gives them a good sense of good music and that music continues throughout life into college,” Farthing said.

Several people from the local elementary schools and within the community attended the event. These people also had their children of all ages.

Gary Colby, photography department chairman, was in attendance with his son, who had the opportunity to join the choir on stage and conduct them through a song.

Colby said Farthing is an extraordinary person for putting on a concert of this type.

There are also not many ULV concerts that have an audience filled with children who are laughing and singing along with the choir group performing.

Farthing was up on the stage with such enthusiasm.

One could see the joy of his work in his face.

He was having just as much fun as the children in the audience.

There are not a great deal of events that could warm ones heart the way that this event did. It showed the respect and admiration that the University has for the younger generations.through a song.

Colby said Farthing is an extraordinary person for putting on a concert of this type.

The event was welcome exposure for many of the children who do not get the opportunity to encounter such things normally.

The next music department concert is the Women’s and Men’s Chorus Concert at 8 p.m. tonight in Founders Auditorium.

Honor society welcomes new blood
Feedback: A little too much to swallow