By Gloria Flores, Jennifer Contreras on May 9, 2003 in LV Life 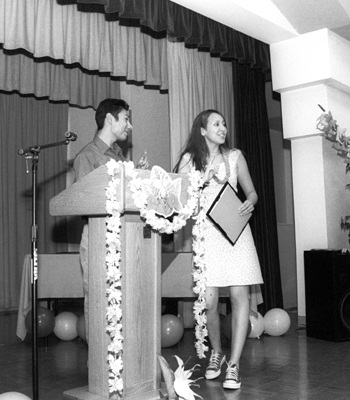 Latino Student Forum President Erick Vasquez presented Sonia Nuñez with the Member of the Year Award at the annual Bienvenida Dinner. Nuñez received the award because of her dedication and loyalty to the club, Vazquez said. The dinner, held Sunday at the La Verne Community Center, also honored Cidieco “Cid” Pinero with the Community Service Award. / photo by Jennifer Contreras

Culture, service, unity, advocacy and education, which are aspects of the LSF motto, also set the tone of the event.

“The purpose of the dinner is to come together as a community, and for students to acknowledge the individuals who support and motivate LSF during the academic year,” said LSF president, Erick Vasquez.

LSF members, Noemi Ortega and Monique Flores started off the night by welcoming guests to the event themed “Latino Luau.”

University Provost Richard McDowell then took the floor to greet the guests, followed by a translation from Hugo Valencia.

Advisers Lisette Sosa and Daniel Loera thanked guests for coming to this event, which they termed significant because it was an opportunity past and present members of LSF to come together.

“It is a chance for families to come together and ‘convivir’ in a celebration that is less structured. It is just a great opportunity to be together,” Loera said.

Dinner took place from 6:00 to 7:00 p.m. as guests filled their plates with chicken fajitas, rice, beans and fresh fruit.

Dinner was followed by a raffle that awarded winners gift certificates to various locations.

The celebration reached its end with the presentation of awards and recognitions, including the community service award, which was presented to Ciriaco “Cid” Pinedo by Ortega.

“We like to recognize the contributions made to the community by an outstanding member of the ULV family, present and past,” Vasquez said.

Vasquez presented the member of the year award to Sonia Nuñez for her outstanding efforts and dedication to the club.

“It is great to have such a great tradition continue for so many years. Hopefully the club and its members will continue to progress,” said Mario Guerrero, class of 2002.

A special recognition award went out to other organizations on campus: the African American Student Alliance and the Rainbow Alliance.

The festivities continued for those students who wanted to stay for the dance that followed the awards.

“I had a lot of fun, and it was a really nice turnout, not too big and not too small,” said LSF member, Beatriz Mendoza. “I danced the night away.”