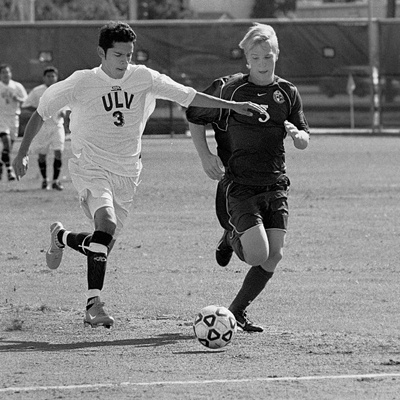 Daniel Aguirre (No. 3), La Verne midfielder, crossed the ball past University of Redlands defender Andrew Zink (No. 5). The Leopards were unsuccessful at the finish, losing 4-0. / photo by Amy Babin

The University of La Verne men’s soccer team took the final Southern California Intercollegiate Athletic Conference game of the season with a 2-1 win over Occidental Wednesday.

Down 1-0 at halftime, midfielder Daniel Aguirre and forward Edgar Manzo put two points on the board in the second half. The Leopards held Occidental for the remainder of the game, earning a win.

The win over Occidental ended a four-game losing streak, the most recent loss of which came against Redlands on Saturday at Ben Hines Field, 4-0.

Redlands leads SCIAC now with 13 wins out of 13 games.

“They knew that we had given Claremont a tough fight the week before, so they had to show their best game,” head coach Cres Gonzalez said. “I hate losing, but Redlands really showed a top performance. They are ready for the playoffs.”

The visiting Bulldogs opened the scoring with a double strike in the 26th and 27th minutes as midfielders Jacob Huber and Adam Acosta created the 2-0 lead for their team on assists from Eric Rolwing.

Redlands sophomore Jason Cloyes and freshman Sergio Juarez added to the final score of 4-0 in the 62nd and 74th minute.

“We played them hard, but we caught a couple of lazy goals,” said forward Steven Lane. “In the last four dropped games, we played tough, but we made a lot of mental errors.”

“We played the four best conference teams, and it is the end of the season for our young team,” Gonzalez said. “Our opponents are especially very strong in defense. We have to play against junior and senior defenders with freshman and sophomore forwards.”

The Leopards end the season with a record of 5-8-1, barely missing Gonzalez’ season goal of “at least six wins,” yet achieving a fifth-place conference finish. 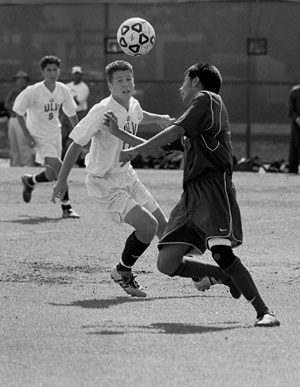 La Verne forward Steven Lane (No. 17) was beaten to the ball by Silverio Martinez (No. 2) of the University of Redlands. Martinez headed the ball past the Leopards’ offense for a counter-attack. / photo by Amy Babin

Gonzalez stressed the progress his team made throughout the season instead of complaining about the missing wins.

“Of course, we would like to be in a better situation with our wins, but for me, the team’s discipline is more important,” he said. “The players have a lot of fighting spirit, that gives the coaching staff a lot to work with.”

The Leopards had a great start into the season, when they beat Caltech and Whittier, 4-0 and 8-1. But the team had to wait for further success until it faced the only two teams they left behind in the conference standings again.

ULV won the rematches against Caltech and Whittier by scores of 3-0 and 1-0.

The young team consisted of 14 freshmen and sophomores and only three junior and senior players.

“We still have a lot to improve, mainly our aggressiveness on the field,” said sophomore sweeper Eddy Geenen. “But this season showed that there is a lot of promise for the future, and that is very exciting.”

Gonzalez is excited about the things to come for the team as well.

He was especially pleased with his team’s progress over the season.

“We have most of our players for another two or three years,” he said. “I believe that we have the potential to win the conference before those players receive their graduation.”