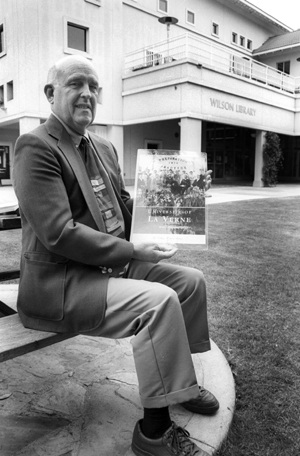 Marlin Heckman, head librarian of the University of La Verne Wilson Library, has seven books featuring antique postcards and archival photographs on local cities and beaches. Heckman is planning to retire from his position this spring. / photo by Amy Babin

University of La Verne head librarian Marlin Heckman was featured last month in the Lifestyles section of the Palisadian-Post, a newspaper that serves the city of Santa Monica, for the recent completion of his latest book, “Santa Monica in Vintage Postcards.”

The book is the sixth installment in Heckman’s postcard series that focuses on cities such as Lordsburg/La Verne, Santa Barbara, Pasadena, Long Beach and the island of Santa Catalina.

All of Heckman’s books show images of California depicted through postcards that he has collected over the years.

As a “deltiologist”, or a postcard collector, Heckman said he has gathered hundreds of postcards.

During his sabbatical two years ago, Heckman said he visited the Los Angles Public Library almost every day for one month when he came across a book that showed a postcard history of America.

“I got to thinking I could do something like that,” Heckman said. “I have always collected postcards, and since I’ve started these, I’ve sort of had in mind, ‘Okay, I’m going to do this town.’ It’s because these are towns I like and think it would be of interest to someone.”

Each of Heckman’s books is formatted to fit about 120 pages with at least 180 to 220 postcards shown.

Arcadia, a leading publisher, has been Heckman’s choice for all six books because of its use of a unique English paperback and stock of paper, designed to display the wide assortment of black-and-white picture postcards.

“I’ve bought (postcards) from antique stores, swap meets; I’ve been to the Rose Bowl swap meet,” Heckman said. “I got interested in how Southern California was portrayed.”

Heckman said he has future plans to publish another postcard book in color.

The working title of this book will be “Celebrating California Postcards from the Land of Sunshine Through the Flowers” and will include several chapters based on what Heckman calls manipulated images.

“The concept is that California has always been a different kind of place, and it’s always been touted as being more than it is,” he said. “Color just does that. So we were teasing our friends in the East saying this is what life is like (in California).”

Before World War I, there were no colored photographs because the United States did not have the technology, Heckman said.

So to achieve color, the black-and-white photos were tinted in Germany, often leading to different colored versions of the same image.

“My time period is roughly the 1900s to 1920s,” Heckman said. “These (photos) were sent to Germany, sometimes with a color key. So if (German artists) didn’t know what the real colors were, they just did the best they could.”

Heckman gave an example of an image of an orange tree with blobs of orange paint to indicate ripe fruit growing.

The problem was, however, there probably were no oranges growing, he said.

His next book will be based on these artist perceptions, or manipulated images.

“In doing these books, the black and white is great because they are original photos,” Heckman said.

After they were colorized, they were even better because the audience got some idea what the colors are about, he said.

“I’ve decided that I can’t really show California poppies or poinsettias as effectively in black and white,” he continued.

In addition to his appearance in the Palisadian-Post, Heckman said he has also appeared in various other local newspapers in the areas he focused on.

Heckman’s success has not gone unnoticed by local community residents, either.

“He’s spent a lot of time doing this, traveling. He loves and enjoys his work, and I’m glad he put this all in a book form for others to enjoy,” Castellano said.

Because of Heckman’s wish to dedicate his time to his work, Heckman has decided to retire from his position at the Wilson Library. This decision has come after 30 years of service to the University.

“It’s time,” Heckman said. “I’m ready to do things that are of my own interest, and the added nights and weekends that I don’t work can be spent on other projects.”

Heckman will step down at the end of this academic year and will go on sabbatical until the year 2004.

He will return only for half time and will continue to work in the archives in the library, where he will organize items relating to ULV.