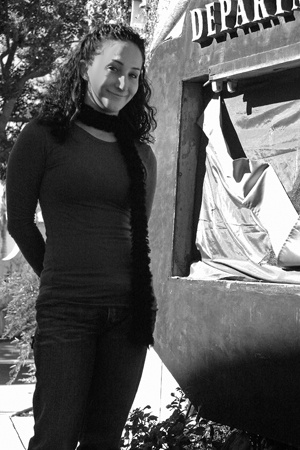 Senior theater major Rhiannon Cuddy will perform the title role of “Electra” in a story of romance and betrayal as part of her senior thesis. “Electra” was written by the Greek poet Euripides and is scheduled for performance in the Jane Dibbell Cabaret Theatre Feb. 22-24. Cuddy made her first appearance on stage in the third grade, when she played “the evil witch who made the pumpkin cry” in a Halloween play written by her teacher. / photo by Rhiannon Mim

Senior Rhiannon Cuddy has always had a passion for theater.

Since third grade when she played the “evil witch who made the pumpkin cry,” Cuddy has enjoyed being on stage.

This February, Cuddy will star in the University of La Verne’s presentation of “Electra,” a Greek tragedy by Euripides dealing with justice, revenge and the individual relationship of a young woman rebelling against authority.

Cuddy said she hoped this performance would be the first of many to come from her newly founded theatre company, Umbrella Machine, formed as part of her senior project. The company is a collaboration between her and a few other ULV alumni.

“We want to perform the play in other places as well,” Cuddy said. “We’re getting ourselves out there because we want to do this as a profession. We want to be successful enough to do what we love.”

James Darrah, the director of “Electra” and a ULV alumnus, is a collaborator in Umbrella Machine. He said it was essential that Cuddy had supportive people around her for this project.

“The theater company is just one example of how important it is to find people who you work well with,” Darrah said. “I have known Rhiannon since high school, and we’ve always worked well together.”

Both said they admired the professors in the department for their dedication to helping students reach their full potential.

“The professors at ULV are professional and skilled in pushing you to excel,” Darrah said.

“I love the fact that the theater department professors bring out your best attributes,” Cuddy added. “The close knit group of people in the department allows you to really get down and dirty into acting.”

It is this complete immersion in theater that Cuddy said she considered as unique to La Verne.

“In order to act you have to get the experience in acting; you have to grow as an actor,” she said. “At other colleges there are too many people, but here it’s personal.”

In this play, Cuddy stars as the lead Electra — a spirited young girl seeking justice.

Darrah said he was positive that Cuddy, in pushing herself to understand the character, would make her performance genuine.

“Rhiannon is uniquely talented, she has the ability to fully throw herself into her work,” Darrah said. “There are so many qualities in the character she will be playing; it’s very in-depth.”

David Flaten, chair of the theater arts department, said he knew Cuddy’s performance would be captivating as well.

“I know it will be a provocative, engaging and very professional production,” he said. “I look forward to seeing what Rhiannon will discover in the role and see her work develop to the next level with a strong ensemble.”

Meanwhile, Cuddy is eager to get into character and transform herself into the cold, brooding and vengeful woman.

“Electra is a dark person, with bottled up emotions about to explode,” Cuddy said.

“I always play characters that have a reason for what they do, but Electra’s line of reasoning is different; it’s so exciting to play a character like her,” she added.

Cuddy said she was preparing for the performance by developing her personality as Electra.

“There are certain things I do with every character I perform, but developing each character is different,” she said. “With Electra, I’m going to start with her thought pattern.”

Cuddy wants the audience to sympathize with, not just understand, Electra.

Flaten has known Cuddy since her freshman year and said he was confident that she would completely immerse herself in her character.

“She has worked hard at learning her trade, her craft. She has great self-discipline and the ability to bring all of her resources of voice, physicality and creative vision to any role she takes on,” he added.

Having held the auditions in November at the Luna Theatre in Glendale, Cuddy said she was satisfied with the cast.

“I’m very happy with the people we have — almost all of them are La Verne people,” she said. “I can’t wait to delve into this Greek world with them all.”

Cuddy was correct to use the word “delve.”

The script is a deep, twisted plot of the effects and cycle of revenge in a household.

Electra is a young woman whose father, King Agammemon of Mycenae, was murdered by her mother and her lover.

Rose Portillo will play the murderous mother Clytemnestra and Tony LaScala will become her accomplice Aegisthus.

Electra sends her brother Orestes, played by Sam Guzik, away with his tutor, Christopher Smith, to save his life, since Orestes has inherited his father’s throne.

Eight years pass and Electra has been treated as a slave and allowed no friends.

Her only friends are her ladies in waiting, played by Natasha Velasco and Seanette Garcia.

Electra is even at odds with her younger sister Chrysothemis, played by Stephanie Borraco, the favorite, more submissive of the daughters.

When Orestes and his tutor come back, Orestes is surprised at how poorly his beloved sister Electra has been living.

Although unwilling at first, Orestes listens to Electra’s plans for revenge and together they carry them out against their mother Clytemnestra and Aegisthus.

Cuddy said she looked forward to the performance and that she admired all the performers, regardless of their role.

“I just can’t wait to get started on this production,” she said.

“Anybody who has the guts to go out there and take the initiative to put on a good show are the people who have the passion to do it, because it’s very much a group effort,” she added.

Lilia Cabello can be reached at lcabello@ulv.edu.