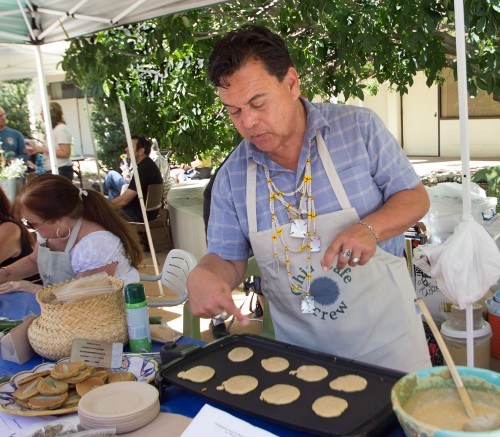 Abe Sanchez makes pancakes using mesquite flower and sage leaves at the California Native Sage Festival at the Rancho Santa Ana Botanic Garden in Claremont. Sanchez states that mesquite helped Native Americans survive because it has a high nutritional value. Sanchez is part of a group known as the Chia Café. They attend different festivals to do cooking demonstrations of California native foods that tribes from the area would have used in the past. / photo by Celene Vargas

Hundreds of people, volunteers, vendors and enthusiasts spent the day tasting sage recipes, talking about medicinal sage and how to successfully plant and grow sage at home.

“Last year was a big success so it is back by popular demand,” said Eric Garton, director of visitor services.
“It is connecting people to nature and learning about ethnobotany.”

Ethnobotany is the scientific study and observation of the relationships that exist between people and plants.

This was a huge aspect in the planning process of the event.

There were informational talks every hour about different topics about sage, like different strains and what some sages are used for.

There was also a nature walk called “See the Sages Salvia Stroll” that happened every half hour.

Participants would walk around the garden and have a volunteer educate them about the sage grown at the Botanic Garden.

“I came last year because I was converting my garden into California native plants and they were helping me,” Claremont resident Jane Carrigan said.

“The ice cream was new and a nice edition, and there is more vendors this year.”

This is the second time the garden hosted the event and they plan to continue it again next year.

Vendors served specially-made sage products for the festival that included sage that was grown at the garden in their ingredients.

“People like the idea of eating native plants,” Garton said.

“It’s organic and natural. It’s about trying to do creative things with plants.”

Bert and Rocky’s Ice Cream was asked to make a sage-flavored ice cream for the festival.

They created the Sage Festival Citrus blend, which they will be selling at their store in Claremont after the popularity of the ice cream at the event.

The ice cream included infused sage cream and minced sage leaves with a little bit of orange zest, giving it a refreshing but sweet taste.

The ice cream was inspired by last year’s festival when another vendor had vanilla ice cream with an agave and sage sauce over it.

It was served again this year providing a sweet and cool treat for those at the event.

“I think they are doing a better job at informing about sage and native plants so you can buy them and plant them in your own garden,” Carrigan said.

“I love plants, I love learning about plants, and I get very taken away by them.”

There was live music and crafts for children, but a majority of people there were nature lovers or those looking for water-wise plants to put in their yards.

The event was inspired after kiosk workers Leslie Husa and Paula Rieker went to a lavender festival in Highland Springs.

“We thought, ‘Why isn’t the garden doing something like this?’” Rieker said.

“A lot of people like sage because they attract hummingbirds, bees and other pollinators.”