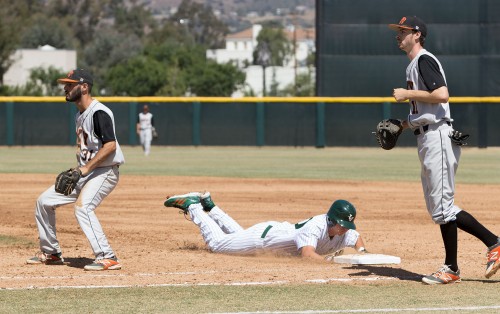 La Verne junior designated hitter Daniel McDonnell dives back to first base after attempting to steal second during the bottom of the fourth inning. The Leopards lost to the Occidental Tigers in game one of the doubleheader, 5-2, after 14 innings Saturday at Ben Hines Field. Then they pounced right back in game two, winning the game, 11-4. / photo by Celene Vargas

The La Verne baseball team clawed its way to victory against the Occidental Tigers in game two of its doubleheader, 11-4, Saturday at Ben Hines Field.

The Leopards remain in first place in the Southern California Intercollegiate Athletic Con­ference with a record of 14-4 and 17-11 overall on the season.

“I don’t think it was that hard for our kids to get up for game two because we knew Brett (Early) was pitching and we felt a little stronger than we felt the other team was going to be, so we were hoping to jump out on them early,” head coach Scott Winterburn said.

The Tigers scored three runs early in the top of the first inning, but the Leopards answered right back.

Thomas and junior first baseman Ben White were then able to score on a fielding error by sophomore shortstop Walker Marks.

“When they jumped out on us 3-0 that just kind of shocked us but you know we stepped up and scored five in the first and made it a game,” Winterburn said.

La Verne continued to lead Occidental, 5-3, until the Tigers started to gain momentum in the top of the sixth inning.

The Leopards picked up some momentum of their own and scored right back in the bottom of the sixth with three runs.

“I saw the ball up and that’s what our offensive plan in that situation is, see the ball up, and I just drove in a couple runs and it was good,” Thomas said.

He finished the game 2-for-5 with three RBIs.

The Leopards did not stop there and continued to score runs.

In the bottom of the seventh, Reyes singled to right field, scoring Williams.

Reyes finished the game 2-for-3 with an RBI.

Watkins and Reyes then were able to score on an error by Occidental freshman third baseman Liam Fischer, going ahead 11-6.

The Tigers could not come back and the Leopards sealed the victory.

Early, a junior, pitched his first ever complete game, giving up only two earned runs on five hits.

“My coach made a joke and said, ‘Hey you’re the only one we have yet,’ and I kind of took it seriously and did it myself,” Early said.

In game one of the series, the Leopards topped the Tigers, 10-8, Friday at Anderson Baseball Field in Eagle Rock.

In the first game of Saturday’s doubleheader, the Leopards battled long and hard, but came up short, 5-2, in 14 innings.

“It was kind of tough losing the first game but we knew that we were better than this team, so we came out ready to get wet and win the series,” Reyes said.

The team will be back in action at 3 p.m. Friday as it faces the Cal Lutheran Kingsmen at Ben Hines Field.

Then the Leopards will travel once again to face the Kingsmen in a doubleheader starting at 11 a.m. Saturday at Sparky Anderson Field in Thousand Oaks.