By Jolene Nacapuy, Michaela Bulkley on May 15, 2015 in Community News, News 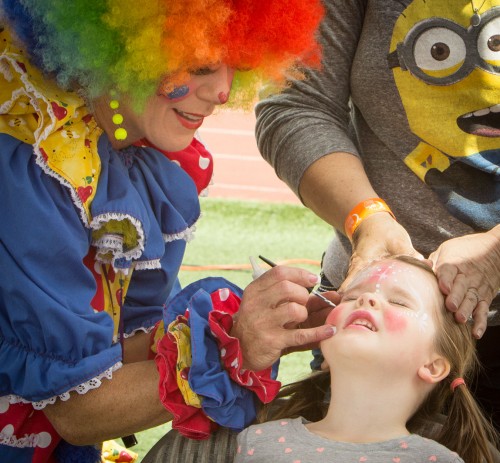 Callie Thomason, 3, gets her face painted as a fairy princess by Penelope the Clown during Relay For Life Saturday at Claremont High School. Penelope was a part of Team Stillwell, participating for a second year. The team was formed by University of La Verne employees in memory of former Director of Special Projects, Judith Stillwell, who died of brain cancer in 2014. / photo by Jolene Nacapuy

Hundreds of marchers braved the cold and raised approximately $45,000 for Relay for Life Saturday and Sunday at Claremont High School.

Though attendance at the 24-hour fundraising event felt smaller as the day got colder, 30 teams and 405 participants attended to raise money to fight against cancer.

Participants raised other funds during the relay by buying raffle tickets and participating in other activities.

“We got to hear the stories and perspectives of the survivors,” sophomore psychology major Marvin Tapia said.

“It gave me a new perspective on how these people live and feel, and how they try to feel more positive about their lives.”

Team Stillwell had 37 members and was the team that raised the most money of approximately $7,234.

Debbie Deacy, director of purchasing and procurement at the University and one of the team captains, raised $1,000, the most money on the team. At the event, the team raised $750.

Team Stillwell was formed by University of La Verne employees in memory of Judi Stillwell, who died of brain cancer in 2014, after being diagnosed in 2013.

This is the second year Team Stillwell has participated and members raised approximately $18,000 at Relay for Life 2014.

There were activities every hour, such as karaoke, dodgeball and the Cupid Shuffle.

The laps from 1 a.m. to 7 a.m. were all themed, such as a school pride lap, crazy hair lap and dance party lap.

Every year, the Relay for Life changes locations between Claremont High School and the University of La Verne.

This year the theme was “Relay Around the World.” Flags of the world were placed around the track and booths had themes representing different places of the world.

Claremont Colleges Library was the individual to raise the most money and raised $2,810 for the team Claremont University Consortium, which raised $4,658.

Relay for Life is sponsored by the American Cancer Society and is the world’s largest fundraiser to fight against cancer.

“This is such an important cause; my grandfather recently got diagnosed with pancreatic cancer, but all my grandparents had cancer,” Relay for Life Experience Lead and ULV alumna Veronica Sepulveda said. “It’s to show support and community and show that together we can fight back against cancer.”