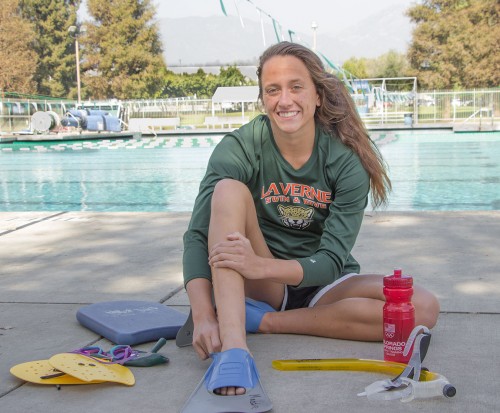 Senior biology major Maddie Lovrensky plans to try out for the Olympic swim team in the 100- and 200-yard backstroke events. To qualify, she needs to have a time of 55.3 seconds. Her current time is 55.4. She plans to train for a year with her coach in preparation for a future tryout. / photo by Celene Vargas

Achieving 2014 and 2015 Female Athlete of the Year and All-American status is not the end for Maddie Lovrensky, as she hopes to be a part of the United States Olympic Team.

She placed second in 100-yard backstroke at the 2015 NCAA Division III Swimming and Diving National Championships in Texas March 18-21, which is her first step toward 2016 Olympic Trials.

“It’s a really cool experience to be able to swim with Missy Franklin and Michael Phelps,” Lovrensky, a senior biology major, said. “It would be cool to go (to the Olympics).”

During swim season, Lovrensky works out in the pool four hours per day and lifts weights three times a week.

As she trains for Olympic Trials, Lovrensky spends two hours in the pool and lifts weights three times a week.

She plans to keep training with La Verne swim coach Patricia Skehan and hopes to improve her time.

Lovrensky enjoys eating healthy but focuses on sustaining a diet that consists of carbs like pastas and breads to keep her energy up during workouts and competitions.

“Sixty percent of a swimmer’s diet should be carbs and 30 percent proteins,” she said.

Lovrensky said she has incorporated this diet into her lifestyle after a nutritionist said it was necessary to build and keep lean muscle.

Her diet and workout plan contributes to her healthy lifestyle.

Backstroking her way to success, Lovrensky has been swimming for the past eight years, swimming the 100- and 200-yard backstroke and 50-yard freestyle.

“She came in as a water polo player who swam a little bit and shocked the conference and herself when she won her freshmen year and has gotten better every single year,” Skehan said.

Lovrensky has been named Southern California Intercolleg­iate Athletic Conference 2014 and 2015 Swimmer of the Year and All-American for the past three years, which is awarded to swimmers who score at nationals with a 3.5 GPA.

“Maddie was really focused and mature as a freshmen, and over the past four years, I’ve seen her open up and become a better leader. She has enough confidence and brings others with her,” Skehan said.

She was also in the finals for Athlete 89, awarded to swimmers with the highest GPA at the NCAA championships.

Striving for success, Lovrensky has remained undefeated in the backstroke event for the past four years.

“I’ve never had anyone (be undefeated) like that ever, anywhere, and I’ve been in this game for a really long time,” Skehan said.

Lovrensky plans to swim at Olympic Trials in June 2016 to continue her journey to possibly swim at the Olympics.

“I definitely know she can do it, she can accomplish anything she sets her mind to and she’s a great swimmer,” teammate senior Melanie Consiglio said.