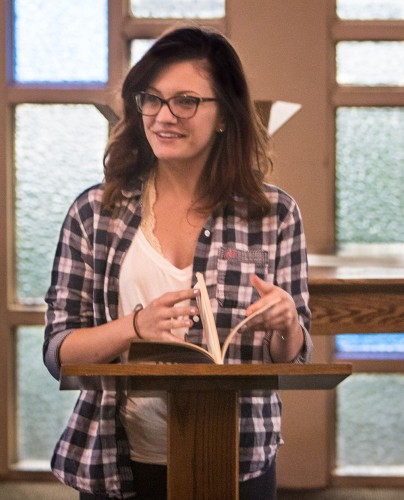 This year’s undergraduate creative writing winner was Guadalupe Robles, sophomore double major in creative writing and Spanish. She was awarded with books and a $100 gift card to a bookstore.

Two of her poems “Letters from your parents, The Moon and Sun” and “Second Letter” were published in the review. She also read these poems at the launch party.

“I was really nervous because I don’t like talking in front of people, especially when it’s so personal to me, but it was really nice to have all the people around when I have made my poems and have others I respect listening to my poems,” Robles said.

Every year around March, undergraduate students have the opportunity to submit works they wrote such as prose, nonfiction, fiction and poetry to get judged by a guest author and the winners are submitted into the “Prism Review.”

The Creative Writing Contest that Robles won is only for ULV undergraduate students but does not require students to be creative writing majors or pay an entry fee. Bernard sends emails to the students to announce the contest deadlines.

“(Robles) has really grown as a writer and I was in class with her last semester so I saw that process,” junior creative writing major Jackie Pimental said, “(Winning the contest) is a great thing to show in the future.”

Approximately 40 people attended the event, and light refreshments were served after with copies of the journal handed out to everyone that attended.

“It was small little function, it was cute and intimate,” sophomore theater major Jessie Bias said.

Writing 305 is a Literary Magazine Staff class where students work as editors on “Prism Review,” focusing on content and learning through reading and discussing other contemporary literary journals.

This issue included poetry, fiction, interviews and reviews totaling to under 150 pages. Associate professor of creative writing Sean Bernard is the editor of the journal.

“‘Prism Review’ is a literary magazine that gives not only undergrads but also people from around the nation the opportunity to have their stories or poems read,” Pimental said

“Its great exposure for anyone who wants to have their writing out there.”

Submission for issue 18 of “Prism Review” is already open online and anyone is able to submit work for the publication.

There is a $2 entry fee that is used to pay the winners and published authors at least $50 for their work.

“As someone who isn’t so close to writing it was nice to see how everything was put together by all the students and it was really cool,” sophomore accounting major Gricelda Lopez said.