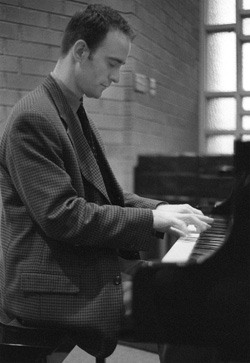 Music filled the air, and a classical whim flowed through the University of La Verne’s Chapel on Feb. 24. The scattering of fingers across a black and white keyboard was pianist Dr. Peter Green’s way of sharing his award-winning talent with ULV students and community members.

Dr. Green was born in Newfoundland, and came to the United States to obtain his musical doctrine under the direction of Stewart Gordon at the University of Southern California.

After starting out as a child who banged on his aunt’s piano, Dr. Green was influenced mostly by his piano teachers. Throughout his musical career, the person who influenced him the most was Gordon at USC.

With a successful career that includes two CBS television performances, studying at the Guildhall School of Music and Drama in London, England and winning first prize in the national piano competition of the Canadian Federation of Music Teachers Associations, Dr. Green still loves to perform for even a small crowd.

Dr. Green said “larger crowds are more intimidating, but fun because you get more feedback.” After performing for an audience of about 30, Dr. Green said that smaller crowds give him a more “intimate” feeling.

Sophomore Chris Arbizu said it sounded like “more than one guy playing, because there are a lot of sounds in the air.”

For Dr. Green to portray this sense, he must evoke energy into his music and be quick with his hands. He said, “Sometimes it’s hard to get going,” but once he starts “the energy just flows.”

Several of the students present at the recital went to fulfill a requirement for an honors colloquium class. Junior Mario Guerrero was one, but he also attended because of his personal interest in music. He said he finds piano recitals “intellectually stimulating, but some people enjoy them more than others.”

Senior Amy Attiyah believes a great way to get students to appreciate classical music is by “requiring attendance to such events in certain classes, and teach the basics about such music so they can enjoy it more.”

Dr. Green said he hopes to keep youth informed about all kinds of music, and would like them to have an active interest in it as well. He said “there are lots of different types of music, and there are good and bad in all genres.”

Having had so many great accomplishments at such an early age, Dr. Green said that from this point on he hopes to “continue playing and helping students.” Dr. Green currently serves as instructor of music at Glendale College, and is also the director of music at First Presbyterian Church in Monrovia.

As the recital closed, and the small audience applauded, Dr. Green took a humble bow and smiled childishly, as if embarrassed. He said his humble and thankful attitude is because he grew up in Newfoundland, and “that’s just the way we are.”

Leopards shape up after slow start
In the News