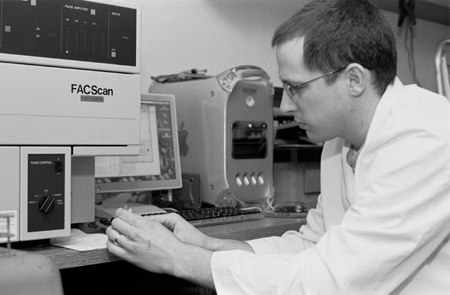 Using the Biology Department’s flow cytometer enables a student to perform cellular research and analysis. Senior Tom Hatch gathers data for his biology senior project. He looks for the effects of zinc toxicity on immune T-cell development using mice cells. He hopes to find a correlation between zinc contained in the Earth’s atmosphere and possible future health problems in humans. / photo by Gloria Diaz

Scientific advancement does not only happen with sheep in Scotland and multi-million dollar facilities.

It’s going on right before our eyes at the biology laboratory in Mainiero Building.

While most students hang out in dorm rooms or at the Supertents, biology major Tom Hatch, 26, spends about six hours daily on research for his senior project: determining whether zinc, a metal commonly found in water, is detrimental to the immune system.

By soaking T-cells, a type of immune cell, in varying levels of zinc, Hatch hopes to find if his hypothesis has scientific validity.

He thought of the idea for his senior project after finding some research that said exposure to zinc “inhibits T-cells from dying,” Hatch said.

In normal situations, only 5 percent of T-cells survive. The rest, considered either too weak or too strong, are killed off.

The situation is similar to a college student taking an entrance exam and a final exam, said Dr. Christine Broussard, assistant professor of biology. The T-cells need to be perfect to pass both tests.

Broussard agreed: “The job of the immune system is to protect the body. And the T-cell is the conductor of the (immune system) orchestra.”

Diseases like lupus, AIDS and some arthritis are caused by T-cell abnormalities, Broussard said.

What worries Hatch is that “pregnant mothers who ingest zinc can pass it down to their babies.”

It could be a disastrous situation for newborns, as well as animals that drink zinc-coated water, who might suffer from immune deficiencies.

Immune systems are weakening due to “heavy metals such as zinc… and other toxicants and are probable reasons why asthma and allergies have increased,” Broussard said.

“The majority of potentially harmful substances haven’t been tested,” she said. “Purifying water doesn’t help because it only works with the few toxicants that have been found dangerous.”

With the help of the University’s flow cytometer, a machine used to measure cell properties, this complicated experiment is possible.

Small liberal schools rarely have such an expensive piece of equipment.

On average, a flow cytometer costs around $200,000, but ULV “worked out a deal with Cal Tech,” Burkhart said.

Hatch echoed the same sentiment: “The best scenario would be if there’s legislation for pollutants and a cleaner environment. But the experience of doing research is satisfying.”