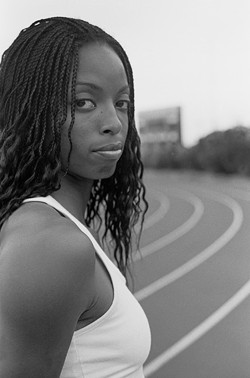 Becoming the first woman in SCIAC history to pass the 39-foot barrier in the triple jump, Lakia Pearson heads to Waverly, Iowa on May 28 for the NCAA national championships. She will miss her commencement ceremony, but said,“…for the last two years I left empty handed, this year I want to win all my events.” The former Miss La Verne will earn her bachelor’s degree in psychology. Pearson also received the SCIAC Female Athlete of the Year Award two years in a row. / photo by Gloria Diaz

Athletic, intelligent and spiritual are the best words to describe the outstanding University of La Verne track and field athlete, Lakia Pearson.

Pearson, a senior psychology major from Lakewood, has accomplished tremendous feats during her time at La Verne.

She is the first La Verne athlete to ever earn consecutive Southern California Intercollegiate Athletic Conference Female Track and Field Athlete of the Year honors.

In addition, Pearson set a SCIAC record in the triple jump last Saturday with a mark of 39-4 at the Claremont Classic Track and Field Meet.

“Lakia has always been that constant that we never had to worry about,” assistant coach Will Darity said. “She always did everything that we asked of her. She developed into a leader.”

Pearson is quick to recognize her Christian faith as a reason why she has had such success at La Verne.

“My faith in God is the reason why I’ve had this success,” Pearson said. “He’s my foundation.”

Pearson came to La Verne from Mayfair High School, where she competed in the 300 meter-hurdles, 100 meter-hurdles and the triple jump before head track and field coach Pat Widolff persistently recruited her.

When first arriving to La Verne, Pearson knew that the level of competition in college would be much higher than that of high school.

“I expected to be an underdog my freshmen year,” Pearson said. “I knew there were going to be great athletes here.”

Pearson continued to work hard in the off-season. Her training regimen consisted of lifting weights three times a day, running on the beach and running the stairs at Long Beach City College.

“Lakia came here as an average athlete and now she’s one of the best,” head coach Pat Widolff said.

“He’s like my backbone,” Pearson said. “He knows a lot about track and he is very supportive.”

Darity, along with Tyrone, have been an instrumental part of Pearson’s success at La Verne.

“Coach Will helped me be successful,” Pearson said. “He’s the only one that knew for sure that I would break the record.”

Pearson was able to excel despite the fact that she competed in several events such as the triple jump, long jump, 100 and 400-meter hurdles and the 4×100-meter relay team.

“Those are my sisters,” Pearson said. “We love each other and support one another.”

Due to the fact that she engaged herself in several events for the good of the team, Pearson suffered injuries during her time at the La Verne. These injuries, however, never stopped her from being successful and giving her all to her team.

After graduation, Pearson hopes to travel with Tyrone and possibly attend grad school. Pearson plans to continue training for her favorite event, the triple jump.

Her ultimate goal is to one day compete in the Olympics.

“She definitely has the ability to get to that level,” Widolff said. “You can’t predict what is going to happen, but if she keeps improving the way she has been and trains hard in good facilities, she will get to that level.”

Pearson’s Olympic career appears hopeful as she will be able to concentrate on one event.

“She will be able to focus on the triple jump,” said Darity. “She won’t have to worry about hurdles or the 4X100-meter relay anymore.”

Adrian Medrano can be reached at amedrano@ulv.edu.