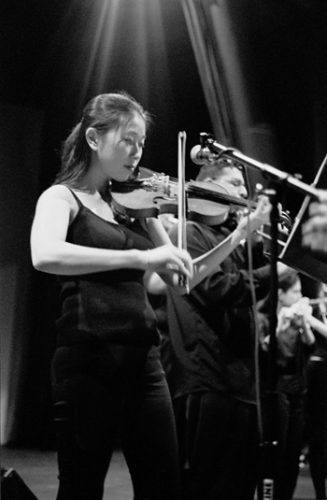 The University of La Verne Jazz Ensemble treated the campus to a great performance on Tuesday. The concert was arranged by J. Michael O’Neal, the Jazz Ensemble director and lead on the keyboard. The stage glowed with beautiful blue florescent lights, giving the audience the feel of the jazz like never before. As the audience sat in the stands awaiting the concert, you could see and sense the urge of the performers to get on stage through the cracks in the curtains.

The introductory song “Dindi” by Antonio Carlos Jobim started off the concert with a very elegant and prestigious feel. Solos by Misa Katigawa on the violin and Nick Pulido on the trombone proved that the jazz is alive in the youth today. In addition, James Muldrow showed off his talents with the classy, sexy sounds of the saxophone.

“The students sounded good, a lot of them came in raw, just knowing the western tradition and now many of them are really hungry to learn new stuff,” O’Neal said.

The next song, “Naima” by the late great John Coltrane, had a very big significance to the Ensemble director. During this performance, Jaime Pulido’s solo with the trumpet was soulful and pleasant to the ears. The performances overall were a display of the musicians talents. Each musician’s solo surpassed the one they played before. O’Neal himself was getting into the show as his spirit poured out on the keys. You could see that the musicians were feeding off each other’s energy.

“James is hot, I’m feeding off of him right now, I’m plugging into him, Jaime and Misa,” O’Neal said.

The beads of sweat on the faces of the musicians and O’Neal were a testament to the dedication and hard work put into bringing this incredible performance to the University.

“We’ve been practicing all year long, but when you’re on stage it’s a whole different feeling,” Muldrow said.

Jaime Pulido slowed the tone down as he took the audience back to a time of youth and love with his trumpet solo of “Black Orpheus” by Luis Bonfi. Another great performance followed when the Ensemble played “Green Dolphin Street” by Bronislaw Kaper. The song had an old school sound with a moderate upbeat pace.

The vocal performances of Michael Stallings, senior music major, and Christina Massingale, were the only thing able to match the musicians’ performances. They performed “We’re In This Love Together” by Al Jarreau as a duet.

The next duet was another Jarreau classic titled “I’ll Be There For You.” Stallings showed the audience the extent of his range in this song.

“It’s always fun to do a duet with Christina Massingale,” Stalling said.

It was Massingale’s turn to show the audience the range of her vocals; she did this with her performance of an Anita Baker classic titled “Giving You The Best That I Got.” Massingale’s voice gave no regard to her non-professional title, she sang like she had been in the business for years.

Massingale gave the performance of the night when she sang the latest Alicia Keys single titled “If I Ain’t Got You.”

For the last performance, the Ensemble treated the audience to a famous hit by D’Angelo titled “Lady.” The song, much like the original, had Stallings hitting the high notes and the audience applauded his talents. One could tell that O’Neal put a great amount of effort into the concert for his Ensemble.

“O’Neal is a busy cat, he works in the studio, does gigs, and still volunteers his time for us, that’s cool,” Stallings said.

Overall the concert was a great success. The musicians were on their game and the vocalist performed like professionals. This was truly a memorable musical event to close the year with.

Intramural hoops gains momentum
From the Bay to L.A., for a cause