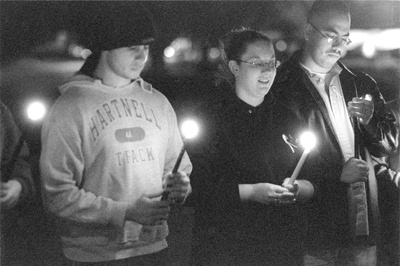 ULV students Bernard Corpuz, Renee Moore and Gabriel Dorantes formed a circle along with other students around the Rock Tuesday for an informal candlelight vigil. Moore, an R.A. at Stu-Han, organized La Verne’s part in this nationwide event in recognition of support for the U.S. troops in Iraq. The candlelight vigil was not meant as an attempt to take sides for or against war with Iraq, but rather to give support to the troops through prayer and recognition and to bring a sense of comfort to family and friends with loved ones serving overseas in the military. / photo by Bailey Porter

La Verne residents, students and faculty paused for 15 minutes Monday to watch the solemn speech by President Bush during which he gave Saddam Hussein the final ultimatum to relinquish power or face war.

The speech was met with mixed reactions, although many University of La Verne students and faculty said they felt avoiding war was no longer an option.

Students, particularly, expressed their fear and worry over loved ones involved in various military posts, some of whom were immediately dispatched after Bush ended his address.

Junior Brandi Thompson said she wishes she had a way to reach her fiancee, a Marine specializing in motor transportation, who enlisted in 2000.

“I’m just scared because I haven’t heard from him,” she said about her fiancee, to whom she has been engaged for three months. “I’m scared of the chemical and biological things going on.”

Although Thompson said she disagrees with most of what Bush said, she will support the American troops.

“I’ll support the war only because (my fiancé) is over there,” she said.

Sophomore Nicole Unrein said she admires the way Bush handled himself. However, she said she does not like the war because her ex-boyfriend, an Army computer specialist, with whom she still remains friends, may be in danger.

“I don’t want him to die,” she said. “I just think the President is jumping too fast into the war. The ultimatum was the wrong way to do it.”

Clark said American foreign policy is reckless and ill advised. He expressed sadness for innocent civilians “who will suffer greatly and perhaps lose their lives for a trumped up cause.”

“I am also dismayed that this nation that I love so deeply is acting as an aggressor and a bully,” he said. “Under President Bush’s path to war, the United States has gone from the recipient of the world’s sympathy and support on Sept. 11 to the object of most of the world’s derision and even hatred on Monday.

“Unless we are willing to commit ourselves to permanent occupation, which I do not think we are, I do not think we could contain Iraq better. No doubt our President will drag us into war, and no doubt military will prevail, but will this destroy terrorism or make the world secure? I doubt it, and it certainly will reduce our place in the world and in world history,” he said.

Despite mixed feelings among the community, support for the troops brought many together Tuesday at a candlelight vigil at the Rock.

“I wanted to show my love for the boys,” she said. “I have to stand behind Jeremy. It scares me that whenever the guys read of an anti-war protest, they feel unsupported.”

Still, Moore and other students said they question the President’s decision to go to war.

“I question this 48-hour ultimatum,” said freshman Jackie Avilez. “The lives of thousands rest on the shoulders of two people ­ Saddam Hussein and his son. I question why we are fighting this war, and I am confused on the cause. President Bush gives some reasons that are valid, but they provoke many questions and confusion because it went from Afghanistan to Iraq.”

Another student who has been affected by this war is sophomore Mayra Ortega.

She attended the vigil to support her husband of four months, Cpl. Johnny Arlando Ortega, with whom she has had little contact. She said it has been hard.

“I support Johnny, but I am not for war; I want peace,” Ortega said. “I don’t agree with Bush; his first and only solution was war.”