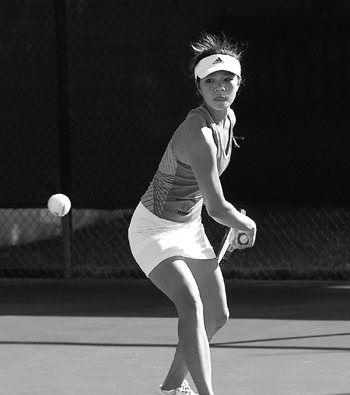 Junior Michelle Tang of the women’s tennis team defeated Jenn Knight from Waynesburg College in a singles match, 6-3, 6-2, March 11. Tang, along with her doubles partner Michelle Fontanez, defeated Waynesburg, 8-6. The Leopards shut out the Yellow Jackets, 9-0. / photo by Jenna Campbell

“This entire day went point by point,” head coach Brian Harrison said. “If we’d have won today, our record would show a win. It wouldn’t show the fact that everyone got out there and battled for every point.”

After dropping two of three doubles matches, the Leopards began singles competition. They promptly fell behind Colorado after ULV junior Lacy Cascadden lost her match. The Leopards rallied behind their other players, starting with senior Paige Hanawalt.

Hanawalt won her singles match in straight sets, 6-3, 6-4. Her opponent lost her composure during the second set, and Hanawalt took advantage of the situation.

“I played very consistent today,” Hanawalt said. “I knew if I hit my shots I would do well.”

“My opponent played really strong; I missed my shots,” Baker said. “The team did really well, they were able to make up for other players’ mistakes. We are a strong team.”

Fontanez took the first set of her match, 6-2, but was caught by surprise losing the second set, 1-6. Determined to win her match she rallied to win the final set, 6-3, taking the match.

With two matches left and two victories still needed, the Leopards turned to freshman Nadjaryan, who was fighting a long grueling battle.

After being down in her first set, Nadjaryan rallied back to push the set to a tie breaker, eventually losing the set, 7-6. Knowing the fate of her team was in her hands she came out in the second set determined to win, going up early 2-0, she dropped the next four games. Trying to fight back she took another; however she was outplayed the rest of the match losing the set, 6-3.

“Every point counted today, unfortunately we fell a little short, however we played awesome, against a really good team, the girls are mentally prepared for their matches, and it shows with the win streaks and close scores,” Harrison said.

After her loss, the team had no chance to win with one match yet to finish. Tang was on the verge of fighting back from a complete break down, after losing the first set, 2-6. Tang battled her opponent to win the second set in a tie breaker, 7-6 (8-6). After that confidence boost, Tang was determined not to lose her match, she dominated the court and won her final set, 6-3.

“It was an impressive win for Michelle, she went down but never gave up, she battled all the way until the end, she is peaking at the right time,” Harrison said.