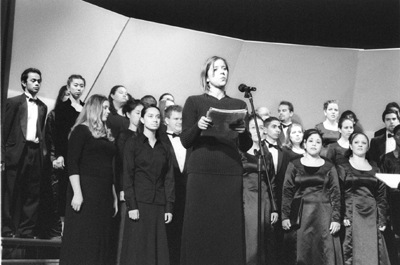 During rehearsal for the Fall Choral Concert on Friday, Whitney Wickhan practiced introducing a series of songs from the works of Shakespeare. The performance “Celebrate the Words” also included songs based on poetry by Whitman, Shelley, Frost and among others, Edgar Allen Poe. / photo by Bailey Porter

The University of La Verne’s music department is going strong.

On Nov. 2 the chorale and chamber singers presented another magical night of music in Founders Auditorium with their mesmerizing performance of “Celebrate the Words.”

The evening began with Scott Farthing, conductor and assistant professor of music, introducing the venue and proudly announcing the live broadcast of the performance on LVTV.

As the performers took the stage, they were greeted with an enthusiastic round of applause from the audience. The female performers wore black dresses that complemented the black tuxedos of the male performers.

Each set started with a riveting reading of poetry followed by a performance in song. The reading served as a prelude to the same lyrics being performed.

Farthing said the reason they decided to do the passage before each set was because “sometimes the choir can’t quite enunciate the words when singing and we wanted the focus on the text and words in the poetry.”

The first of the 21 songs and 12 sets performed was “A Jubilant Song,” written by Farthing himself and based on a poem by Walt Whitman.

The crowd of more than 100 anxiously awaited to hear the night’s performances. They hung onto each note, absorbing each lyric of the student performers.

As the night continued, filling the auditorium with soothing melodies and heartfelt songs, the performers grew more at ease.

The lyrics seemed to flow naturally through each pore, making the performers one with the song.

“I was happy with the outcome of the concert and compared to the previous night’s performance they (student performers) were less nervous and more confident in their singing,” Farthing said.

Although most of the performers were women, the men were given equal time to shine as the women left the stage. They performed the song, “Romance.”

The music of the piece was written by Farthing and inspired by an Edgar Allen Poe poem. Farthing said he was inspired by the poem’s elegance and beauty.

The female performers also got a chance to have the stage to themselves, and the night’s only soloist, Kim Reed, left the audience in awe of her extraordinary voice.

Sophomore and alto singer Sarah Morales said she “loved performing all the pieces because they were very expressive and there was so much energy coming from the audience.”

Fellow performer Siddeeqah Shabazz, sophomore and alto singer, agreed with Morales and added, “I think it (the performances) went well. Our notes were on point, I liked the energy in the second half, and I think the audience had fun ’cause we had fun.”

Throughout the night there was no escaping the electrical performance of Shabazz; she radiated energy and electricity and captivated the audience.

Her love of performing was obvious and addictive, creating a synergy between performance and audience. Her expressive recital of the poem, “Jabber Walking,” was a prelude to the dynamic performance the vocalists would later give in song.

Another of the night’s memorable moments was when Angela Perry, senior and alto singer, recited her passage and at the end sung a very soulful and enchanting “Hallelujah” sending shivers up the spines of the audience.

After her performance Perry said that “the atmosphere was nothing less than perfect, the energy of the choir was high and uplifting, and the enjoyment from the audience radiated amongst us all.”

As the night was coming to an end, the audience was surprisingly rewarded with a performance by special musical guest, jazz pianist Gayle Serdan

Her accompaniment was the perfect addition to an already incredible night.

Serdan shared that the performers did a wonderful job.

“The audience was really appreciative of (the performers) love and support for each other,” she added.