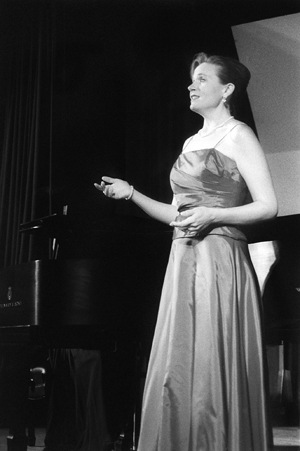 Tania Batson rehearses during a sound check for her performance on, Sept. 20. Batson received a bachelor’s degree in music from Emory University and holds a master’s of music in vocal performance from Boston University. Last year, she was a soloist for the Los Angeles Philharmonic’s presentation of “Das Klagende Lied.” / photo by Bailey Porter

“Magical. Inspirational. Entertaining.” These were just some of the words sophomore Siddeequah Shabazz used to describe Tania Batson and Catherine Miller’s performance Sept. 20 in Founders Auditorium.

The performance was the result of intricate planning that lasted a year.

It was a joint effort by Timothy Durkovic, Scott Farthing, Kathleen Lamkin and Reed Gratz in putting together a broad spectrum of concerts.

The fall concerts, running from September to the first week of December, will feature internationally-known artists.

With more than 100 people in attendance, Friday’s concert was as riveting as Farthing had predicted.

“I think it’s going to be beautiful. I’ve been listening to Tania practice and she’s a beautiful singer,” Farthing said. “Her pianist, Catherine Miller, is marvelous and is also one of the coaches at the Los Angeles Opera.”

Batson is a nationally known soprano singer who sings as a guest vocalist for the New York City Opera and The Los Angeles Philharmonic. She is also the sister of Ruth Trotter, art department chairwoman.

The evening began with Batson and Miller taking the stage to a round of applause from the audience.

With the piano in the middle of the stage and a white backdrop, Miller took a seat at the piano and Batson began singing, “Ich Schwebe,” the first of 24 songs and four sets she would do that night.

Batson looked poised, well rehearsed and vocally, was in top form. If she was nervous, the audience would have never known because Batson exuberated pure confidence.

The audience seemed to be enchanted by Batson’s extraordinary range as they intensely focused their attention on her.

After the first set, Batson greeted the audience and thanked everyone for coming.

She then proceeded to say, “This evenings song selections are about the manifestation of love-love of nature, love of parent to child, love of our country.” With that said, Batson, wearing a maroon dress and hair pinned up, began her second set with “C’est L’extase.”

At intermission, ongoing praise for the performers was the main topic of conversation.

“She has an amazing voice. Her range is amazing,” said sophomore Bernadette McDaniel.

McDaniel’s comment prompted a discussion from other students. “Tania’s stage presence was amazing, and made her performance enjoyable. With her facial expressions you were able to get a better idea of what she was singing, even if you couldn’t understand a word of it,” said sophomore Wanda Groppi. 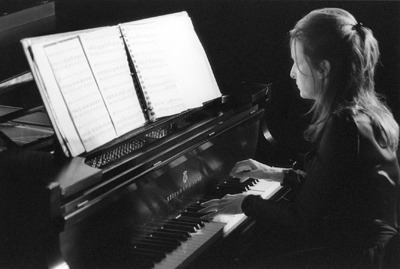 During a sound check on Sept. 20, accompanist Catherine Miller prepares herself for the concert later that evening featuring singer Tania Batson. Miller graduated from the University of Southern California School of Music and the Julliard School of Music and is currently a pianist and coach for Opera Pacific and the Los Angeles Opera. / photo by Bailey Porter

The audience’s comments were as intense as the songs performed, as everyone was caught in the whirlwind of Batson’s explosive performance.

With only half of the night’s performance finished, it was evident from the accolades that Farthings decision to feature internationally-known artists was a success.

The end of the intermission ignited unanimous applause as Batson and and Miller entered the stage and began the third set called, “Six Elizabethan songs.”

Like the previous sets, Batson’s amazing diction and body language brought the songs to life.

At the end of the third set, the anticipation from the audience was so overwhelming, that they absorb Batson’s words wholeheartedly.

As promised, the final set was an amazement of lyrics and melody that vibrated within.

At its conclusion one could feel the hunger for more that was present throughout the audience.

Batson and Miller bowed to the audience as Batson’s son presented her flowers on stage.

Batson ended the night with “He’s Got the Whole World In His Hands,” a song whose title was perfectly fit for Batson. As she soared to heights with her voice, so did the applause of the audience.

Both Batson and Miller walked off the stage to a standing ovation.

Miller later commented on how nice the turnout and audience was, and what an enjoyable experience she had.

“I really enjoyed performing here,” Batson said. “It was a very intimate and appropriate venue for a classical recital,” she added.

Batson and Miller were impressed with the University initiative to bring classical music to the students who otherwise may not have made a conscious choice to experience it. They also commented that the audience receptive atmosphere made them feel at home.