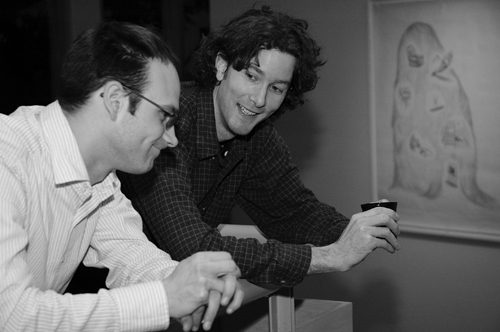 The Tall Wall art reception honored Gerald Davis, who is showing five large color pencil drawings. The event was held Tuesday in the Arts and Communications Building. Davis met art department manager Dion Johnson at a summer art program at Yale University. Davis’ art has been displayed in shows throughout Los Angeles and his latest opening is this Saturday at the Black Dragon Society Gallery in Chinatown. / photo by Jenna Campbell

“I hope my art makes people wonder why a person would make that,” said Gerald Davis, whose exhibit “Drawings” is displayed on the Tall Wall in the Arts and Communications Building at the University of La Verne.

The drawings, which look like pieces straight out of a sketchbook, certainly do leave the viewer with questions and that is what good art is supposed to do, according to associate professor of art Keith Lord.

“It’s way more important to raise questions than it is to answer them,” Lord said.

“Most artists haven’t come up with the answer,” he said, “They are constantly looking and asking.”

Davis’ exhibit, a blend of realistic and less recognizable, cartoon-like pieces all have a fantastical finish to them which Davis hopes gets people thinking about the psychology of the artist—an element of art that has always fascinated him.

Convinced as a child that he would become an animator, Davis spent countless hours tucked away in his room drawing Disney characters or inventing his own, he said. However, the road to animator seemed too tedious so he turned to another art form allowing him to create independent pieces and remain uninhibited by censorship for the last 11 years.

Davis’ large format drawings are a different concept for the Tall Wall, which is one of the reasons director of the Tall Wall Dion Johnson chose Davis’ work.

Johnson saw Davis’ work in other exhibitions for years and thought the artist’s drawings would make a big impact on the white wall and the wall would be a unique stage for the fine detail that makes up the drawings, Johnson said.

For example, “Double Murder” is like a one-liner joke that has been broken up in the drawing to explain each instant of the scenario at once, Davis said.

The drawing shows a skier skewering a rabbit on his ski pole, while back at the cabin, the skier’s wife is being killed by the rabbit’s mate.

“He doesn’t have to draw pencil lines everywhere which makes for this great big world,” Johnson said about Davis’ technique of activating the extensive negative space in three of the pieces.

Davis even sees the scattered arrangement of his five framed pieces on the wall as a blown-up version of his own work.

The reception for “Drawings,” held Tuesday, brought art and Honors colloquium students, professors and the artist together in a space that offers viewers various altitudes for reflection.

Some took to the stairs or loft for an overhead observation while others preferred an eye level scrutiny of the art.

“I’m interested in the students seeing the work and seeing the realism that makes it accessible and also the strangeness and unpredictability that takes it into a new direction,” Lord said.

“It’s almost eccentric,” Lorena Hernandez, a junior art minor said. “I find it interesting what his initial thoughts might have been to create this work.”

“Something creepy was always happening when we went over there,” Davis said.

In “What my landlord’s cat was thinking when he found her” Davis curiously explores the thoughts a cat might have upon finding his owner dead.

Tim Parks, who helps with art classes here, said that Davis’ work reveals a level of vulnerability because it clearly shows the thoughts of the artist. The way the pieces look like the private images collected in his sketchbook shows the artist’s strength of character, Parks said.

Bailey Porter can be reached at porterb@ulv.edu.