By Jamie Mahoney, Jenna Campbell on April 23, 2004 in Softball, Sports 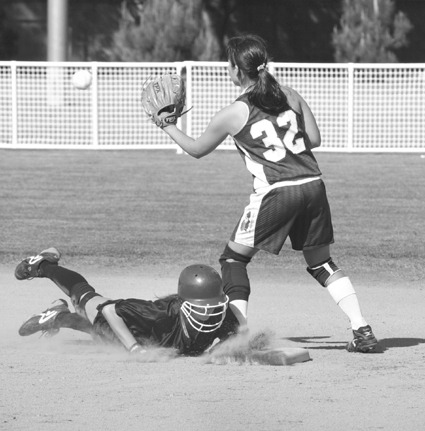 University of La Verne freshman Suzy Riker dives back to second base to beat the tag by Tina Hamayasu (No.32) of Claremont-Mudd-Scripps. La Verne defeated the Athenas, 11-5, Friday at Wheeler Park. CMS came back to beat the Leopards Saturday, 7-6 and 6-5. / photo by Jenna Campbell

The University of La Verne softball team remains in the lead in the race for the Southern California Intercollegiate Athletic Conference title despite losing its most recent series to Claremont-Mudd-Scripps, 2-1, last weekend.

Saturday the team lost two close games 7-6 and 6-5. The Leopards achieved their only victory of the series Friday at Wheeler Park, 11-5.

These were the team’s first two losses in conference play this season.

“We just gave up a few very key plays,” head coach Robin Haaker said. “They hit the ball where we weren’t. The balls really had eyes this weekend.”

The Leopards blew a 6-2 lead in the seventh inning of game one on Saturday, giving up five runs.

“It just goes to show why softball is a sport,” Haaker said.”Anything can happen.”

Despite the two loses in the double-header on Saturday, Haaker was pleased with the team’s overall performance.

“Everyone came up in situations and got the job done,” she said.

The Leopards’ win on Friday was a stunning performance by the entire team.

“We came out and hit the ball and were consistent. When they scored, we answered back,” sophomore Amanda Jones said.

The Leopards led the game, 5-0, until the fifth inning when a runner tagged up and scored on a sacrifice fly.

ULV continued its hitting streak in the fifth inning, starting with a single from Silagyi and a two-run home run from junior Amber Guerra.

Senior Elaine Martinez ended the Athenas’ run in the sixth with a diving catch in right field.

The Leopards could not carry over their success to Saturday.

“The two losses give us more of a purpose for this week,” Haaker said.

The losses to CMS will be a driving force for the Leopards, who need to win two of the three games against Redlands this weekend.

“If we want to win we are going to have to go out and play hard, play to win and play together,” Jones said.