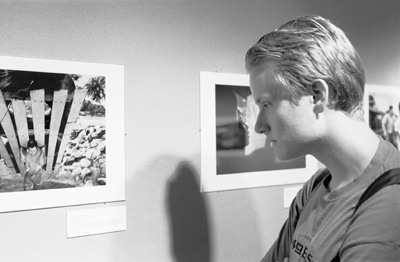 Junior James Beare, a history major, visited the exhibition “Bound to El Nórte” at the Irene Carlson Gallery of Photography in Miller Hall. The print, titled “Out of Central America,” reveals the effort of a raft captain having recently crossed the river separating Guatemala from Mexico. The exhibition of 30 photographs by Pulitzer Prize winner Don Bartletti of the Los Angeles Times will be on display until Oct. 10. / photo by Jenna Campbell

Photos of children fleeing from immigration authorities, riding on top of trains and hiding behind train cars are among the images that can be seen in the exhibit “Bound to El Nórte,” in the Irene Carlson Gallery.

The photos taken by Don Bartletti, a staff photographer for the Los Angeles Times, Orange County Edition, were part of the six-part article entitled, “Enrique’s Journey: The Boy Left Behind,” which won him the the Pulitzer Prize in April of 2003, among other prestigious awards.

Once he heard about the project, Bartletti was anxious to be part of the team.

“Fifteen years prior, I had met an Honduran boy in a shelter in San Diego, who was caught by immigration as he was traveling by train,” Bartletti said. “Coincidently, the issue came up.”

It took a total of three months for Bartletti to capture all the images used in the story. Bartletti and the reporter started in Tegucigalpa, Honduras, to view Enrique’s living conditions, which aided them in understanding why he fled.

Once on route toward the United States, Bartletti realized the dangerous and, at times, life-threatening situations he had gotten himself into.

“It was very dangerous in the southern part of Mexico because of the bandits,” Bartletti said. “We had to make sure that we were only on the train when undercover police were controlling the trains.”

Once aboard the train, Bartletti rode only on the back and on top of the freight trains.

“The potential for children falling off the train was bad,” Bartletti said.

Each step Enrique took, Bartletti was right behind him.

Aside from following Enrique’s journey, Bartletti separated himself from the reporter and Enrique as he sought the others desperately trying to make it safely into the United States. He rode each route twice on the freight train alone in Northern Mexico then took the bus back to where the reporter was.

“My job as a photographer was to tell the story of not just Enrique, but also of the many other young boys and men trying to get to the U.S. on freight trains,” Bartletti said.

For the duration of the trip, Bartletti encountered other problems, such as being asked for money.

“I could not give even one peso,” Bartletti said, “because that would change the dynamics of the story since people always feel that they owe something to you.”

Bartletti was also robbed by bandits once on the train.

“I lost my cameras, film and notes,” Bartletti said. “I would not do it again. We were lucky the first time.”

After viewing Bartletti’s “Bound to El Nórte,” it is easy to understand how a mere 30 photographs were able to gain so much recognition.

“The photographs were very captivating,” Desiree Quintero, junior communications major, said. “They were very moving as it told a story.”

The exhibit can be seen until Oct. 10 in the Irene Carlson Gallery of Photography in Miller Hall, and a reception and lecture given by Bartletti will be held in La Fetra Auditorium Oct. 2 at 7 p.m.

More information on the exhibit can be found on the website at www.latimes.com/news/specials/enrique.