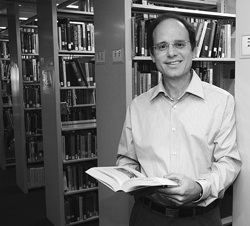 “I try to show how music has a place in history and culture,” said Professor of History Kenneth Marcus. Marcus has written two books titled, “Politics of Power: Elites of an Early Modern State in Germany” and “Musical Metropolis: Los Angeles and the Creation of a Music Culture 1880-1940.” Besides his teaching and research, Marcus performs in a blues band called The Crown City Trio. / photo by Jenna Campbell

Is there anything Kenneth Marcus cannot do? Not only is he assistant professor of history at the University of La Verne, but he is also an accomplished historian, writer and musician.

He wrote the book because he found there was little documented about the topic and believed music was vital to Los Angeles’ history.

“By piecing out key aspects, we can have a better understanding of how Los Angeles became the major metropolis it is today,” Marcus said.

Though Marcus does address the importance of commercial pop music in the book, he stretched beyond radio and film and also focused on the music of the satellite cities surrounding Los Angeles. He explored influential music from cities like Boyle Heights and San Gabriel, where many musicians were not directly associated with the music industry.

Marcus also explored the elaborate music education programs offered at Los Angeles’ public schools before World War II. Many teachers of the era believed that music played a crucial part in the students’ development, which fascinated Marcus. He felt compelled to mention the achievements of the “unsung heroes,” the teachers of that era.

The idea for the book was born in 1996 when Marcus was researching theater music in the Los Angeles area. Originally, he wrote a paper that stressed the importance of the creation of theaters and their growth to surrounding communities in Southern California.

Marcus’ paper was well received by the Los Angeles History Research Group, an organization that critiques various works by professors and historians. The positive feedback encouraged Marcus to further his research on the subject and write a book.

“I was struck by that environment, which happened to be very supportive,” Marcus said. “(The book) then almost developed organically.”

As a self-described “social historian,” Marcus examined various letters, programs, diaries, manuscripts and photos to gather information for the book.

He visited numerous research centers throughout Southern California, such as the Los Angeles Museum of Art, the Huntington Library, USC and the Beverly Hills Film Library. He also ventured outside the borders of Los Angeles County to research in Hemet and Riverside.

Additionally, he conducted interviews with survivors of the era and their children to discuss the role music played in their lives and in their communities.

Marcus’ passion for music, history and writing all came at an early age.

At age 15, Marcus began to write music and perform for audiences.

In addition to the piano, Marcus taught himself to play the guitar with a “how-to” book he bought while in high school. Although he describes the initial learning process as “a long, bloody experience,” Marcus developed a passion for the guitar as well.

Meanwhile, Marcus developed an interest in history and writing during his grade school years. He enjoyed writing papers about “anything to do with history.” His mother, a historian, also helped him develop an appreciation for history.

Although Marcus did not originally consider studying history in college, he realized that he greatly enjoyed reading, writing and teaching, and wanted to become a “communicator for history.”

While in Europe, Marcus visited the English colleges, such as Oxford and Cambridge. He was captivated by the atmosphere and decided to stay in Europe. He received his doctorate in History from Cambridge University.

He began his teaching career at Cal Poly Pomona; however, he found the class sizes to be an unsatisfactory environment to teach in.

“I felt as if I was broadcasting rather than teaching,” Marcus said.

He discovered ULV when a notice was sent to him about a position in the history department. Marcus took a tour of the campus and liked the school’s intimate environment. He has been teaching at ULV since 2001.

“Dr. Marcus brings a scholarly disposition and a passion for education to the department,” said Jason Neidleman, associate professor of political science. “He effectively cares for all of his students while maintaining an energetic research agenda.”

Marcus hopes that, through his teachings, students can get a sense of fun by reading, writing and talking about history. He also hopes that he can convey that history is “much more than simply facts and dates.”

“I very much hope that my students can find a connection with a particular aspect and make it their own,” Marcus said. “It doesn’t matter which era or country, it is just whatever speaks to them and is meaningful for them.”

“The arts play a much greater role in people’s lives that historians give credit to,” he said.

In addition to teaching, Marcus is also set to write a follow-up to “Musical Metropolis: Los Angeles and the Creation of a Music Culture.” For the past two years, Marcus has been researching Arnold Schoenberg, an Austrian composer who greatly influenced Southern California’s classical music scene. He hopes to write a book documenting the composer’s impact.

In addition, he hopes to return to the recording studio and record another album of American music, as well as some of his own music.

“Dr. Marcus has a wide range of interests that are reflected on campus, particularly music and theater,” said Stephen Sayles, professor of history. “He has organized conferences on campus dealing with aspects of California history and culture, and significant names in Southern California history have presented papers. From what I gather, students like him because he is very interactive in terms of teaching methodologies. I am told that he even brings his guitar to his classes.”

Tracy Spicer can be reached at okcomputerfan01@aol.com.

Happenings
Movie Review: No towel can save you from ‘Guide’