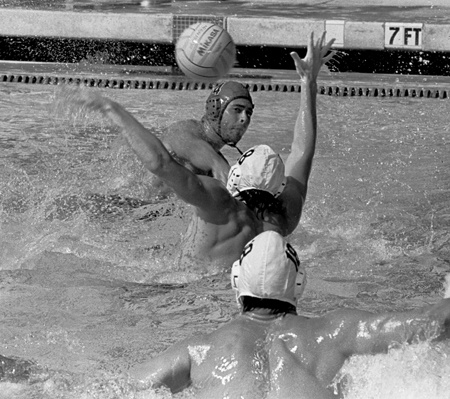 Senior Owen Barrett (No. 4) of the University of La Verne delivered a goal against Occidental Saturday at the La Verne Aquatics Center. The Leopards dominated the Tigers with a 13-2 victory. ULV improved to 13-12 overall and 4-3 in conference play. / photo by Jenna Campbell

Playing its last two regular season games of the year, the men’s water polo team closed out with a 1-1 record, dominating Occidental with a total team effort, winning easily, 13-2, but dropping a heartbreaker to Claremont-Mudd-Scripps, 6-5, on Nov. 5 at the La Verne Aquatics Center and on Saturday in Claremont.

The Leopards finished the regular season with a 13-12 overall record and a 4-3 record in Southern California Intercollegiate Athletic Conference play which put the Leopards in a three-way tie for third place.

Despite finishing in a third place tie, the Leopards were given the fourth seed in the upcoming SCIAC Tournament and will be seeking revenge in a rematch with Claremont-Mudd-Scripps in their opening-round match. ULV lost to CMS, 6-5, on Nov. 5.

Redlands received the No. 1 seed with a perfect 7-0 record in SCIAC.

The tournament will be held at Axelrood Pool in Claremont.

“I think after the Occidental game we got some of our confidence back,” assistant coach Alex La said. “We beat them pretty bad and the team is looking forward to the rematch with Claremont in the tournament.”

The Leopards dominated the match with Occidental, using a total team effort led by senior driver Will Hernandez with four goals and Will Broer was right behind him with three goals.

“Our team is playing extremely well,” Broer said. “Everyone is stepping up the way they should each and every game.”

Other contributions for the Leopards were recorded by Owen Barrett and Ricardo Negron with two goals each.

Seth Shelton and Jared Carvitto each chipped in with one goal a piece.

The Leopards jumped all over the Tigers early, scoring three first-quarter goals and never looking back.

The night before, the Leopards battled head-to-head with CMS, coming out on the short end of things losing, 6-5. The Leopards were led by Broer who scored two goals in the game.

The game was a tough defensive battle as both teams only combined for 15 shots on goal.

This was the last tune-up for the Leopards before they begin battle in the SCIAC Tournament.

“Confidence-wise, we are pretty excited,” Broer said. “We will have a tough game with Claremont but we should be able to beat them. We also have a pretty good shot at winning the whole tournament if we play our game.”

Advancement to the National Collegiate Athletic Association tournament depends on the results of the SCIAC tournament.

Jonathan Corral can be reached at jcorral@ulv.edu.