By Daniel Torres, Jolene Nacapuy on February 26, 2016 in Basketball, Sports 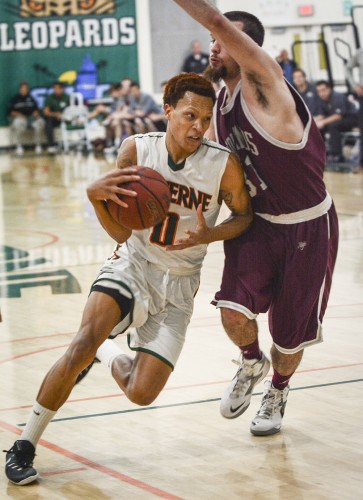 La Verne junior guard Hakim Arnold drives for a layup while being covered by Redlands junior guard Sean Milligan Tuesday at Frantz Athletic Court. Arnold finished the game with a team-high 22 points and seven rebounds. The Leopards led most of the game, then their lead slipped away in the last three minutes. La Verne had a chance to win or tie the game, but the next possession resulted in a turnover, as the Leopards lost, 78-76. / photo by Daniel Torres

The crowd was on its feet and the chants of “Defense” rang across Frantz Athletic Court Tuesday.

Unfortunately the chants ended in sighs as the men’s basketball team’ season came to an end in a last second loss to the Redlands Bulldogs, 78-76.

The Leopards hoped to send out their seniors on a win, but fell short when Redlands freshman guard Joey Sponheim ran down the clock and drove through the middle for a layup to take a 78-76 lead, with two seconds remaining.

The Leopards had a chance to tie or win the game, but the ball was turned over.

“It’s just disappointing for us. I’m disappointed for our team, and our seniors that our season isn’t going to continue. It was a tough way to lose a ball game,” head coach Richard Reed said.

The team ended its season with at 9-16 overall and 7-9 in the Southern California Inter­col­legiate Athletic Conference.

“I thought we played well in spurts, but we just fouled too much, and that was the difference in the ball game,” Reed said.

“I’m proud of Nick and Brian’s efforts over four years, and I just thank them for their efforts and what they’ve given to the program over the course of their time here,” Reed said. “I told them to hold their head up, and once a Leopard, always a Leopard.”

Redlands senior forward Al Bjekovic hit a three-pointer to give the Bulldogs their first lead, 71-70, with 2:57 left in the second half.

La Verne answered back with a layup by junior guard Khaneal Mason to take back the lead, 73-71.

Sophomore guard Connor Head pushed the lead up to five, after he sank a three with 1:43 on the clock, 76-71.

The Bulldogs managed to tie the game at 76 with a three and layup, with less than 45 seconds left in the game.

“We just gave it away,” Stiver said. “We had a 15-point lead, and then they just slowly chipped it away. It’s a crappy way to go out. If we won, we would’ve went to playoffs, but now our season’s done.”

The Leopards got on the board first with a three-pointer by Lewis and a layup by junior guard Hakim Arnold, 5-0.

Senior center Shawn James put up a layup to get the Bulldogs on the board, with 18:19 on the clock, 5-2.

Both teams went back-and-forth, but Leopards managed to hold the lead and went on a 17-6 run.

Before heading into halftime, Arnold drove to the basket and put up a layup, with four seconds left on the clock, 38-25.

Arnold finished the game with a team-high 22 points and seven rebounds.

La Verne started the scoring in the second half with a layup by sophomore guard Anthony White.

Midway through the second half junior guard Cruz Mertens put up a layup but was answered back by Redlands sophomore forward Nate Battisti, 61-48.

Mertens finished the game with 11 points.

The Bulldogs’ momentum began to kick in with seven minutes remaining, as they went on a 21-5 run to cut the deficit.

“The game was solid and it just trailed off after they got going,” Stiver said. “The bench was dead tonight, and that’s a big part of our game cause they’re the hype and energy. They also shout out valuable information to guys on the floor, so that killed us a little bit too.”

Bjekovic sank a three-pointer and Sponheim made a put back layup to tie the game at 68, with 4:25 left in the game.

Stiver managed to put up a floater to break the tie, but Redlands put in a three on their end, to take just their second lead of the game, 71-70.

From there, the Bulldogs took control of the game, despite the Leopards’ efforts and resulted in a tough the loss.

“It’s a tough loss for what it means for our season. It’s always a hard one. That’s five in a row now, and again that’s a game that we should’ve won,” Lewis said. “We got a little too comfortable, let some guys get going, and didn’t get the stops when we needed them.”

Lewis finished with 56 total rebounds and averaged 2.2 rebounds per game, and 4.9 points per game.

With much time in the offseason, Stiver and Lewis said they will miss the camaraderie built with the team.

“I’ll miss practice and seeing my teammates everyday, just cause it’s a family that you grow with,” Stiver said. “I’m just going to miss the everyday grind.”

Stiver finished the season with 44 total rebounds and averaged 2.1 rebounds per game. Reed said he is not thinking about next season because it has not settled.

“There’s a time to process that, but now is not that time,” Reed said. “It’s still too fresh, so we’ll have to figure that out at a later time.”