By Camila Rios, Daniel Torres on October 2, 2015 in Sports, Volleyball 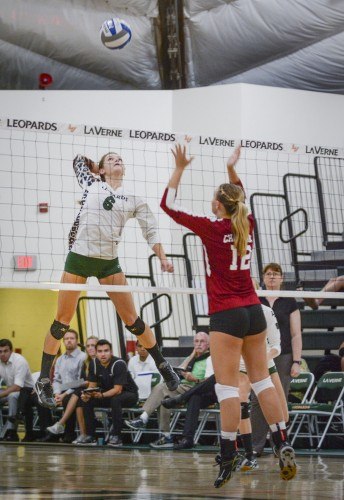 La Verne senior outside hitter Brittany Yaxley returns the ball against Chapman sophomore middle blocker Ali Robinson for a point to take an early lead in the third set of the match Saturday at Frantz Athletic Court. After losing a seven-point lead in the first set, the Leopards were able to dominate the Panthers in the next three sets, as they sealed the win, 3-1. With the win, La Verne managed to end Chapman’s undefeated record in Southern California Intercollegiate Athletic Conference play. Yaxley led the team with 16 kills and 16 digs. / photo by Daniel Torres

The Leopards extended their win streak to six, as they swept the Redlands Bulldogs Tuesday at Currier Gymnasium for their sixth consecutive win.

“It was a really good win but we have a lot to work on,” head coach Jenna Panatier said.

Junior setter Tiffany Mancuso started the game off with three aces and a big block, giving the Leopards a 5-0 lead in the first set of the game. Chapman turned the game around with a 12-7 run to tie it up and went on to take the first set, 25-21.

“Every practice we try to isolate the skills, passing, blocking, etc. and then work on them,” senior outside hitter Brittany Yaxley said. “No matter what, win or lose there’s always something we can work on.”

During the second set, the Leopards started off strong with a 5-1 lead.

La Verne found its rhythm and set its pace for the rest of the set.

“I feel like we’re doing really well and if we just keep doing what we do, then I’m confident the rest of the season will turn out well,” Robinson said.

Both teams came out swinging in the third set.

With La Verne up, 20-19, back-to-back kills made by Robinson and Yaxley pushed the Leopards lead to three.

Chapman’s efforts were not enough, as La Verne closed out the third set, 25-20.

In the fourth set, the Leopards earned five points in a row, keeping up their momentum to close the match.

Junior outside hitter Cassie Thompson managed to get two kills and a big block to push the Leopards ahead by 10.

Cross ended the game with seven kills and 11 digs.

“We did a good job of executing,” Yaxley said. “We had a lot of good technical things.”

An attack error by Chapman helped close the deal for the Leopards.

“We’re going to continue working on coming together as a family,” Panatier said.

Both teams continued to battle back-and-forth.

An attack error by the Panthers and a kill by Yaxley, sealed the match for the Leopards, 34-32.

Mancuso had a game-high 28 assists.

The Leopards will face the Pomona-Pitzer Sagehens at 7:30 p.m. Friday at Frantz Athletic Court.

Camila Rios can be reached at camila.riosgomez@laverne.edu.