By Daniel Torres, Kat Simonelli on March 27, 2015 in Baseball, Sports 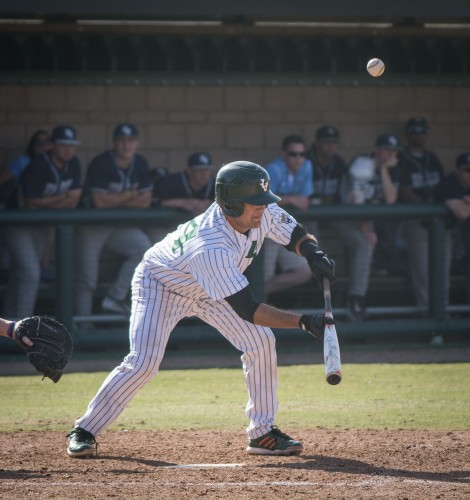 In game two of the Leopards’ doubleheader, La Verne senior catcher Zachary Quinones pops up a bunt. Kean sophomore catcher Michael Kendall caught the pop up for the first out of the inning. The Leopards pulled ahead with a win, 14-6, despite dropping game one, 4 -1, at Ben Hines Field March 19. / photo by Daniel Torres

The baseball team battled back after a 4-1 loss in their first game to finish off the series with a 14-6 win against New Jersey natives Kean March 18 and 19 at Ben Hines Field.

The Leopards took advantage of a first inning fielding error and scored three runs to secure the lead early in the game, 3-0.

“Baseball’s contagious sometimes, so once somebody usually breaks through it usually takes the pressure off and I think that was the difference,” head coach Scott Winterburn said.
“We kind of got some confidence back knowing that we could score so that was the biggest difference.”

Junior shortstop Woody Reyes made a diving catch and a double play in the top of the third to help the Leopards hold off the Cougars.

“I made all three outs that inning and that’s always a good feeling just knowing that when the ball comes to me everyone knows we’re gonna get outs,” Reyes said. “Knowing everyone can count on me. That’s a good feeling.”

La Verne extended their lead in the bottom of the third after junior first baseman Ben White hit a home run deep into center field.

“I had been struggling yesterday and my first at bat today, so when I got up 2-0, you know I looked over at Winterburn and he told me to calm down, you know you can’t come out of your plan when you’re up 2-0 just because you think you’re gonna get a fastball,” White said. “It felt good to break a sort of short slump.”

Kean came back in the top of the fourth after junior centerfielder Matt Meleo homered to right field, bringing two runs in.

The Leopards answered right back in the bottom of the fourth.

“We knew we had to create some offense so Nick Michaels came off the bench today as a freshman at left field, we stuck him in there and he gave us five or six really good at bats and he sparked us,” Winterburn said.

Kean scored two more runs in the fifth, but any hopes they had of winning the game were crushed after a set of errors put La Verne on the board with four more runs.

Jebbia was hit by a pitch with the bases loaded sending Reyes home to score.

Sophomore third baseman Jakob Thomas then hit a single up the middle and advanced to second on a wild throw by Meleo, letting Jebbia, Michaels and Watkins in to score, 11-6.

“We did pretty good, we capitalized on a lot of the other teams mistakes and did what we needed to do to score a lot of runs but there’s definitely a lot of areas where we didn’t exactly play the way we wanted to,” Jebbia said.

Freshman pitcher Nick Byrd came to the mound for the Leopards in the bottom of the fifth and pitched four shut out innings keeping La Verne in the lead.

In the bottom of the sixth Jebbia doubled down the left field line, bringing Michaels home to score, putting the Leopards up by six runs.

Reyes went 2-for-5 at bat and had two RBIs in the game.

The Leopards will face Pacific University next at 3 p.m. Friday and at 11 a.m. and 2 p.m. Saturday at Ben Hines Field.