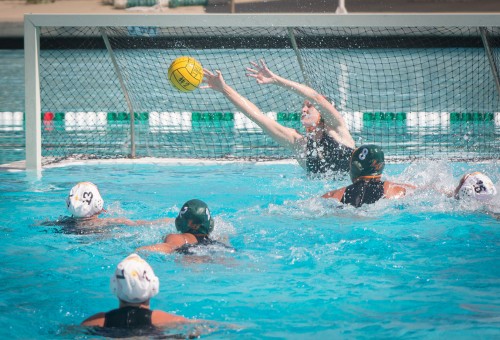 La Verne freshman goalkeeper Hailey Westwood barely prevents a goal by Claremont-Mudd-Scripps, which they quickly rebounded and scored. CMS continued to pounce on the Leopards throughout the game, ending the Southern California Intercollegiate Athletic Conference opener, 11-3, in the Athenas’ favor Saturday at La Verne Aquatics. / photo by Daniel Torres

The Athenas took advantage of the Leopards’ turnovers, allowing them to seal the win.

“I’m quite disappointed with the loss, but it was good to see where we are in comparison to the other conference teams,” head coach William Rodriguez said. “It gives us a good idea on what we need to work on in moving forward in the season.”

CMS took an early lead in the first quarter but junior center Catie Tuning managed to find the goal to score with an assist by senior utility Jacqueline Rojas and tie the game at one.

With 20 seconds left on the clock, freshman attacker Jessica Gaffney scored a goal past freshman goalkeeper Hailey Westwood giving the Athenas a 2-1 lead heading into the second.

The Leopards remained scoreless in the second quarter, as the Athenas were able to score three more times. “Coming into the game we had good energy,” Tuning said. “They’re just a tougher team and we didn’t respond at the same intensity that they brought and I think that was our downfall.”

In the third, La Verne had a chance to get back into the game with multiple 6-on-5 opportunities, but still unable to execute a goal.

Gaffney went in for another shot but senior utility Haley Conner rebounded the ball to get it in past Westwood, for the first goal of the quarter, 6-1.

With 1:48 on the clock, sophomore utility Erin McCarthy extended the lead for the Leopards, 7-1.

An assist by senior utility Amber Tardif, allowed junior utility Emily Randall to answer back with 47 seconds remaining in the third quarter, 7-2.

“I felt really good going into today’s game, it’s just once the game started to get going I think we took the first two kind of slow,” junior attacker Lora Marquez-Salgado said. “Then we started to get back into it too late, but I feel like overall it was a good game.”

The Athenas continued to overpower the Leopards with strong defense and kept pushing the momentum forward.

Midway through the final quarter, Arneson made a backhanded donut shot past Westwood, 9-2, to extend the lead.

Less than two minutes to play, Rojas put in a five-meter penalty shot for the Leopards last goal of the game, 10-3.

CMS was able to score one more time to seal the 11-3 win over La Verne.

“We need to be more physical and intense during the game,” Tuning said. “It’s obviously a pretty physical game so we have to be able to respond to that when things come at us. We’re a young team and have a new coach so just fixing some little problems that happen and getting our chemistry to be better.”

Both teams were strong throughout the game, but the Athenas found their rhythm quicker than the Leopards.

“I think individually we just have to get out of our own heads and as a team, I think we have the structure and everything down, but I mean there’s little things we have to work on like our passing and just putting the ball in the net,” Marquez-Salgado said.

The team also faced Caltech and earned its first win of the SCIAC, 18-2, Wednesday at Braun Athletics Center.

“I felt that we looked much stronger against Caltech and that showed in the score,” Williams said.

The Leopards shot eight unanswered goals in the first, to give La Verne the upper hand.

Going into the break, the Leopards were up, 14-2. La Verne continued to dominate, both offensively and defensively, as they scored two more goals to seal the game.

“We definitely need to get a little faster on our counterattacks and our opponents have an easier time catching up with us,” Williams said.

“We’re not shooting at a high percentage and also our power plays need to be executed a lot better to get on the board much faster,” he said.

“We faced a lot of Division I scholarship programs in the preseason and so that was good for us in the sense that we got to play some of the best of the best in the country,” Tuning said. “It was hard games, but they were worth while.”

The team will return to play against the Cal Lutheran Regals 11 a.m. Saturday at the La Verne Aquatics Center.

“I feel like this season we just need to get some wins in the SCIAC and move up some spots,” Tuning said. “I totally believe that we’re capable of doing just that.”