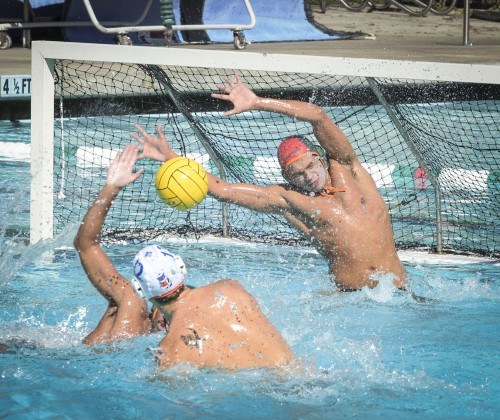 Leopards freshman goalkeeper Ian Hernandez denies a goal by Pomona-Pitzer junior attacker James Baker, after a break away halfway through the fourth quarter at their match Saturday at the La Verne Aquatics Center. Hernandez was able to block six shots in the fourth quarter alone, but La Verne could not get out of its deficit, losing to the Sagehens, 11-5. / photo by Daniel Torres

After falling behind as many as six goals, the men’s water polo team lost to the Pomona-Pitzer Sagehens, 11-5, Saturday at La Verne Aquatics Center.

“I’m a little disappointed with today’s game,” head coach William Rodriguez said. “I think we had a couple of defensive breakdowns and that’s what happens when you play a solid team like Pomona.”

“I’m extremely happy that they were able to have their senior day and it’s sad to see them leave,” Rodriguez said. “But they surely paved the way for the start of a new beginning for La Verne water polo.”

The Leopards never led in the game. They suffered from many turnovers and Pomona-Pitzer took control, dominating offensively.

Two minutes into the second quarter, Pomona-Pitzer senior attacker Neil Forsythe scored a goal that went past the right side of La Verne freshman goalkeeper Ian Hernandez, giving the Sagehens a 3-2 lead.

They scored four more times to extend their lead to 7-2 and cruised to an easy win.

In the third quarter, Pomona-Pitzer started off with a 6-on-5 opportunity, but Hernandez blocked the shot.

Hernandez finished the game with 13 saves, while six of them came in the fourth quarter.

A minute later, Pomona-Pitzer took an 8-3 lead with a fast-break goal by junior attacker Matt Alexander.

With less than two minutes left in the third and the Sagehens up, 9-3, the Leopards managed to take advantage of a 6-on-5 opportunity.

The Sagehens goalkeeper was out of the box, and Castro managed to score.

With three seconds left, Pomona-Pitzer answered back on a fast break and took a 10-4 lead into the fourth.

In the fourth, both teams managed to score one more time, but the Sagehens still had a big lead.

Acosta scored a late goal for La Verne off an assist from sophomore driver Josh Vega to make it 11-5, but the Leopards could not come back in time and fell short.

“I think we were trying to force a lot of things because of the way they were guarding us, they were doing a great job at that and so I feel like we were forcing things that weren’t 100 percent there,” Jimenez said.

In the first quarter, the Sagehens got on the board first.

With a 6-on-5 opportunity, the Leopards answered back with a goal by Williams from an assist by Jimenez, to tie the game, 1-1.

The Sagehens regained the lead on a 6-on-5 opportunity with a goal by senior driver Phillip Clayman.

The Leopards managed to equalize the game once again to end the first, as Phillips assisted Acosta.

“I feel like it’s just being at the right place at the right time during the counter attack, which is great,” he said.

Despite La Verne managing to keep the game close in the first, they fell apart in the rest of the game.

Acosta said the Leopards have a few things to improve on, such as working on their executions, 6-on-5 opportunities, and better passing to prevent turnovers.

“We didn’t really capitalize on what we needed to do. We were looking to counter a lot, but we didn’t capitalize on their mistakes, which we should have taken advantage of,” Acosta said. “We definitely have to work on our 6-on-5 plays and put them away when we get the opportunity, so we have to put away those shots and work on our passing.”

The team also wrapped up Southern California Inter­collegiate Athletic Conference play with a loss in its last home game of the regular season against the Redlands Bulldogs Wednesday at La Verne Aquatics Center.

“I’ll most definitely miss my teammates once the season’s officially over,” Jimenez said. “They’re like brothers to me, so it’s just gonna be really hard to go from seeing them everyday to not.”

Despite the game being close in the second quarter, the Leopards could not convert and fell short, 10-8.

In the second quarter, Bowers, Vega and Batchelor each scored a goal, as the Leopards were able to take their first lead of the game, 5-4.

Both teams continued the game with many goal attempts in the third, keeping the game close and La Verne on the edge.

In the fourth, the Leopards were down, 9-8, after Jimenez scored on a 6-on-5 opportunity.

In the last two minutes of the game, the Bulldogs scored two more goals, taking home the win.

“We’re definitely not where we want to be,” Rodriguez said. “We still have the same record we did last year at this time, but we are still looking for a strong finish and a good conference tournament.”

The team will face the Whittier Poets at 11 a.m. Saturday at Lillian Slade Aquatics Center for its last game of the regular season.

“With Whittier, we definitely have to score at a higher percentage of our power plays, like the 6-on-5, which we’re completely capable of. And if we could do that, we’ll be OK,” Rodriguez said.