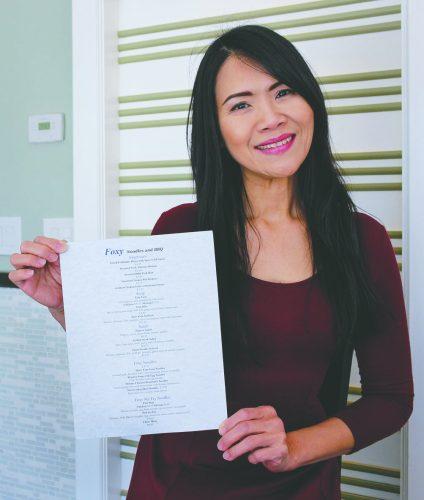 Joyce Patra recently opened her third restaurant, Foxy Noodles and BBQ, at 507 N. Mountain Ave. in Upland. After a 20-year stint in restaurant management in Thailand and Australia, Patra opened her first restaurant, Bangkok Blue, in La Verne in 2003. She sold the restaurant 10 years later to open 50-Fifty Asian Fusion on Indian Hill Boulevard in Claremont. / Photo by Tyler Evains

Foxy Noodles is Patra’s third restaurant, joining her lineup with 50-Fifty Asian Fusion in Claremont and Bangkok Blue Thai Cuisine in La Verne. “I wanted Foxy Noodles to be something very easy, casual but yet healthy and tasty,” Patra said.

Bejan Hejazi and his family patroned the new Foxy Noodles and BBQ with his family. This was their first Thai cuisine experience.

“The chicken Pad See Ew was so tasty, I would definitely recommend it to my family and friends,” Hejazi said.

Patra, who is half Thai and half Chinese, was inspired by her father to open her own restaurants.

While growing up in Bangkok, Patra’s father used to cook for their neighbors, and she helped by serving the dishes.

She went on to earn her bachelor’s degree in hospitality and hotel management in Bangkok before relocating to Sydney, Australia, for an extension program that would give her the credentials to open her own restaurant.

It was in Australia where Patra met her husband, who played in a jazz band at the same Thai restaurant she worked at. The two fell in love and moved to America to begin their married life.
Patra opened her first authentic Thai restaurant in La Verne and named it Bangkok Blue Thai Cuisine.

Ten years later, she sold Bangkok to start fresh with 50-Fifty Asian Fusion in Claremont.
The success of the two restaurants encouraged Patra to open her third restaurant, Foxy Noodles and BBQ.

Patra loves a challenge, and she wanted to try running a restaurant with a different atmosphere.
“I always like to create new dishes and do something new,” Patra said.

Patra said she wanted Foxy Noodles and BBQ to be more of a relaxed setting for people of all ages to come and enjoy her renowned Thai food at reasonable prices.

Sudakan Watcharasakunee, also known as “Gift,” has been working as an employee of Patra’s for seven years.

“My favorite dishes are the foxy crispy chicken or the spicy tom yum noodles” Watcharasakunee said.

For Patra, picking just one favorite dish is not easy. Patra said her favorite salad is the papaya salad.

As for noodles, she loves the spicy tom yum noodles most and her favorite chicken dish is the foxy crispy chicken, which comes with garlic fried rice and a sweet and spicy sauce.

“A lot of my customers love the foxy crispy chicken,” Patra said.

Patra said is very close with many of her customers and has never been much for paperwork. “I love to interact with people and I love the service industry,” Patra said.

She goes out of her way to make sure that her customers are taken care of and that they enjoy her food. Hejazi, ordered the seafood tom yum soup.

“It was so filling even though the portion was not too big,” Hejazi said.

Gift says she believes that everyone who eats at Foxy Noodles and BBQ will surely find that the food is high quality, authentic and reasonably priced.

Foxy Noodles and BBQ is located at 507 N. Mountain Ave. in Upland.