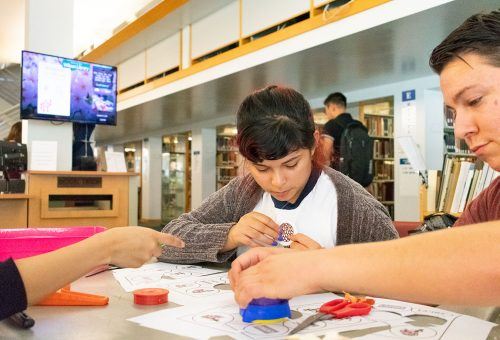 Belen Ruan, senior anthropology major, pins a Latinx inspired button to her shirt and Ivan Fernandez, senior kinesiology major, creates his button in celebration of Hispanic Heritage Month Monday in the Wilson Library. Ruan, with the help of Karouxline Sotelo, sophomore education major (not pictured) created the button in under five minutes with a hand-held tool. Complimentary pan dulce, a sweet bread that is a staple of Hispanic Heritage Month, was offered while students created their buttons. / photo by Layla Abbas

“Hispanic Heritage Month celebrates all of the achievements of the Hispanic community,” said Librarian Norma Durian, who helped plan the event.

“Southern California (has) a large Hispanic population so it’s important to highlight those achievements.”

Those who participated in the event created their buttons with a hand-held button making tool.

Participants chose from a variety of buttons with Latinx designs and patterns.

Sabrina Mora, the library media specialist, said she thinks it is important for us to embrace our own culture.

“If you’re not familiar with your culture, explore it and learn more about it,” Mora said.

Mora said that food is way for people to learn about a culture.

Dia De Los Muertos, celebrated on Nov. 2, honors loved ones who have passed away.

“Celebrating this holiday is a way for me to connect to my roots,” Sanchez said.

Hispanic Heritage Month, which started Sept. 15, will conclude with an event called La Explosion Latina from 12:30 to 3 p.m. Oct. 13 in Sneaky Park.