By Ashley Mubiru, Layla Abbas on November 2, 2018 in Sports 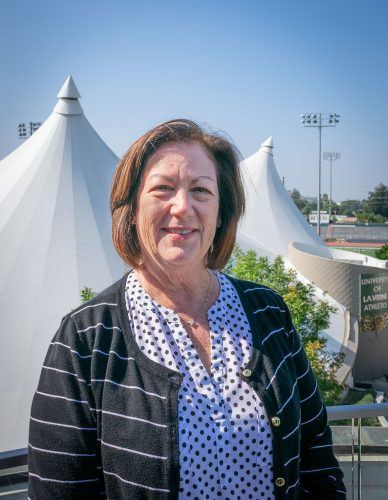 Marilyn Oliver, professor of kinesiology, celebrates her 40th year of teaching at the University of La Verne. Oliver said she was not expecting to stay at La Verne for this long, but fell in love with the tight knit community she found in the athletics department. She said the small classroom setting allows her to connect with each student individually, something unavailable at larger institutions. / photo by Layla Abbas

Marilyn Oliver, professor of kinesiology, has reached her 40-year mark as an educator at the University of La Verne.

Her teaching journey has gone beyond the role of just teaching kinesiology.

“I grew up in a family of all girls, so we all had to do sports and fitness activities with my dad,” Oliver said. “So that got our family interested in kinesiology in movement.”

Oliver grew up in Anaheim, and was born in Inglewood, and lived in Downey for the first four-and-a-half years of her life.

Oliver said she originally wanted to study recreation in college so she could play for a living.

Chapman University, the college Oliver eventually attended, however, did not have a recreation program.

“I thought, what’s the next best thing? It’s physical education, which is the old name for kinesiology.”

Oliver enjoyed studying physical education because it focused on keeping the body fit and studies how the body moves.

Oliver was a four-year collegiate volleyball player. She was a gymnast for a short time, but had to quit because of an injury, which led to an interest in sports medicine and athletic training.

“I could combine my love for physical education, fitness and teaching, with the health field of athletic training.”

Oliver’s undergraduate degree was in physical education with an emphasis on teaching, while her master’s degree was in sports medicine.

Oliver said if she has even a small amount of influence on successful students, she takes pride in their achievements.

After 40 years Oliver said she still enjoys what she does.

She came to the University as the head athletic trainer and kinesiology professor and held both positions for 20 years, but soon her specialty became athletic training.

These days Oliver spends most of her time in the classroom.

Oliver has been a clinician, an administrator, fulltime faculty member, and was then called into doing administration again serving as department chair of kinesiology.

“She’s one of the first female athletic trainers in the entire country,” Alvarez said.

Alvarez said that Oliver’s involvement in sports movement and health contributes to her teaching.

La Verne was a smaller community when Oliver started, with not as many faculty members, or students.

“You kind of stay in your department a bit more (today) because there’s a lot to be done,” Oliver said. “We made more time to go visit colleagues in other buildings, the class schedule and community times were different”

When the University was smaller, there were more places where students and faculty could exercise, but La Verne has grown. Oliver takes her students out to Campus West so they can actively learn what they listen to in lecture.

She finds that it is vital for others and herself to be physically active.

“It always involves us getting out of our chair, and made us all be part of the lesson.” Hererra said.

“She’s the most influential person in my collegiate life,” Harrison said.

Oliver is a family friend of Harrison’s, and has said that Oliver is the reason why Harrison decided to attend La Verne.

Harrison said she is impressed with Oliver’s teaching style, and how her role at the University has changed and developed over time.

“As students we have to be active in class, she gives out what you put in,” Harrison said.