By Maydeen Merino on November 8, 2019 in Feature Slider, Soccer, Sports 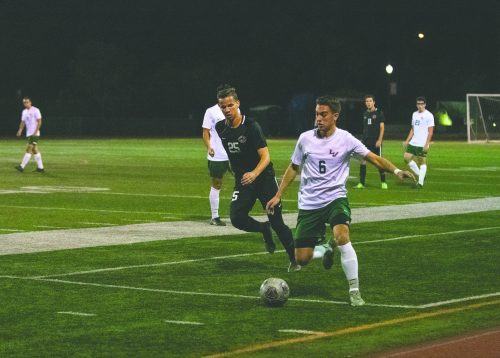 La Verne junior defender Tyler Avila pressures and strips the ball from Chapman freshman midfielder Chris Sanchez on Saturday at Ortmayer Stadium. The Leopards lost to the Panthers, 1-0, on senior night to finish out their season. / photo by Maydeen Merino

The game began at a quick pace with both teams coming out the gate swinging. The Leopards showed their aggression by taking five attempts on goal early in the first half.

But as Chapman’s offense began to set up around La Verne’s goal in the second half, a Leopard defensive miscue in the 69th minute allowed McLane to tap the ball in for the only score of the game.

“The mistake cost us a goal, it didn’t cost us the game. We still need to finish our chances offensively. I thought we played 89 minutes of good soccer and just had a one minute relapse,” head coach Trevor Persson said.

The Leopards mustered 12 shots on goal but were unable to capitalize.

“We had a lot of good energy to start off, a lot of good chances unfortunately they just didn’t go in but we always fight back and usually try to get something going, but we just ran out of time today,” senior defender James Metoyer said.

After McLane’s goal the Leopards continued to fight back throughout the entire game, but they were unable to break through.

Kolodge was voted the recipient of the 2019 Southern California Intercollegiate Athletic Conference Award of Distinction for his volunteer work with Meals on Wheels in Claremont, a meal delivery program for those incapable of making food for themselves.

“They (the seniors) have been a joy to have around,” Persson said, “It’s been nice to see them grow, develop, and just represent our school for the amount of time they have been here.”

The Leopards played a hard fought season, ending in sixth place in SCIAC with a 4-7-1 record. They were 9-10-1 overall.

The season began strong in September with a 5-3 record then fell short in October, losing six games in the month.

Their main goal was to finish in the top four, with hopes of being in fourth place several games ago.

“Overall it’s been a definitely up and down season from starting 4-2, then to not win a game for six or seven games was definitely tough but the future looks bright,” McKenzie said. “I have had a great time being a part of it. Even through it all our locker room stayed together.”

Throughout all the ups and downs the season has brought the Leopards they continued to fight and stick together as a team.

“I think we fought really hard every game, some of the issues the last couple of seasons were towards the tail end of the game we would give up and get a little tired,” Kolodge said. ”Every game this year regardless how we started this game we would finish every game strong, everyone was giving 110% effort at all times.”

All four seniors expressed their gratitude to represent La Verne.

“To start off, it has been a blessing and to have these teammates, it’s just been an amazing experience, an amazing ride,” Rodriguez said. “Eighteen years playing soccer and all this has to come to an end, we have to move on with our lives but these memories will always stay, there has been a lot of ups and downs this season but we have all put our heart into this game, which is something that we love with a passion.”