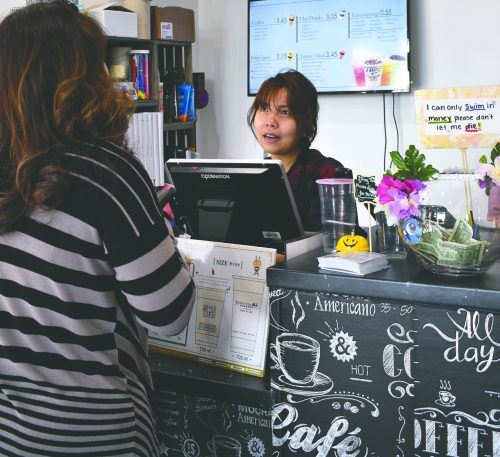 Nha Le is the manager at Ding Tea, a boba shop that opened Jan. 15. Ding Tea sells not only tea, but also milk tea, coffee and fruit juice. Customers may choose to add boba or any other toppings, including golden boba, coffee jelly, egg pudding, mousse and rainbow jelly. / photo by Maydeen Merino

Ding Tea opened its doors in La Verne Jan. 15 and offers a wide variety of teas, boba, hot drinks, coffee, and other sweets to its customers.

Owner Nha Le came to the U.S. at the age of 15, which led her to pursue her dream of opening her own business.

“If you don’t do what you love, things become very repetitive,” Le said. “You know, at the end of the road, when you retire you want to know, did you have fun at work, what did you accomplish?”

She spoke about the privileges that come along with having your own business.

“I was at corporate where I got to manager and maybe I become an upper manager, but then you become a very small part of a very big machine, you are nothing,” Le said. “But this, you create on your own and you have fun at work everyday and that is what you should strive for.”

Le was raised in Vietnam and came to the U.S. as an exchange student at the age of 15 and spent a few years in Orleans, Indiana. Le described La Verne as similar to her hometown.

Le visited other boba shops around La Verne, and compared the quality of their boba to Ding Tea’s.

“I feel like it is not up to par and that the people there do not get the authentic experience of how good boba tea is supposed to be,” Le said. “That is one of the main reasons that I decided yes, we’re going to set it out in La Verne.”

“It’s my second time here and usually we just go to the ones in Claremont. It’s closer, so it’s good to kind of get away,” said Jiwon Lee, senior economics major from Pomona College. “And I also really like this Ginger Longan tea, so that’s why I came.”

Characters from the anime “Totoro” are painted by hand onto the walls.

Customers said they appreciate the atmosphere of Ding Tea.

“The atmosphere of Ding Tea is very comfortable and inviting and I think I’m going to try to start doing my homework here more often because it’s super easy to focus,” said Raychle Perkins, 20, student at Citrus College.

Ding Tea has earned a five-star rating on Facebook and positive comments on Yelp in the short amount of time it has been open.

The business is attracting students from the University of La Verne, who enjoy spending a lot of their free time there.

“I come here all the time to the point where it’s only been open for like two months and I already have a free drink, which means I have had 10 drinks,” sophomore English major Elizabeth Galioto said.

Galioto said Ding Tea has great customer service, and said she appreciates some of the small details in Ding Tea’s decor.

Le said she plans to add more to the menu and make the business itself more visually appealing.

She said her main goal is to make it a welcoming and comfortable spot for guests.

“Personally, I want it to be a community place where the kids can come and study and hang out,” Le said.

Le said she has a dream to open a store near Mt. San Antonio College and Cal Poly Pomona in the future.

Ding Tea is located at 1457 Foothill Blvd. in La Verne.