By Kayla Salas, Maydeen Merino on October 5, 2018 in News 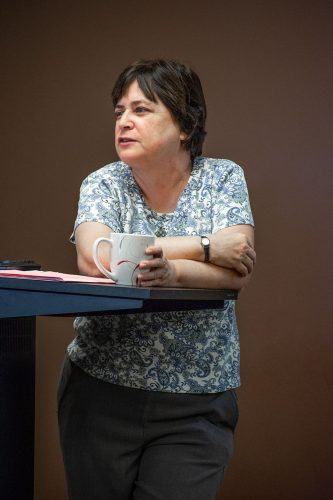 Professor of Public Administration Marcia Godwin discusses harassment of mayors across the United States Tuesday in the President’s Dining Room. Her research found that this kind of behavior is common against local leaders in small cities. / photo by Kayla Salas

Godwin conducted research with help from many other professors across the country.

The research focused on both men and women mayors across the United States.

The survey focused on mayors who have been harassed due to their positions they hold.

“We are not unfamiliar with problems of people being rude and uncivil in public settings,” Godwin said.

“Psychological violence is a stronger term. (That is when) you actually have someone directing comments, harassing behavior, and these threats against someone else more intended to harm,” she said.

She said the best example of this was the Senate hearing last week, in which Supreme Court nominee Brett Kavanaugh and Christine Blasey Ford testified.

Both have been victims of such psychological violence, Goodwin said.

There is similar negative behavior in local government as well, she said.

“They are having a pretty wild election. I could hear just from the live stream, the audience heckling and some really nasty comments directed at the mayor Debbie Stone,” Godwin said.

Godwin’s research focused on the uncivil behavior of people against their local government members.

The designers of the survey sent a questionnaire by email and mail form, to mayors in the United States.

They received about 282 responses with only 66 responses from women.

The survey asked mayors whether they have been harassed through social media or in public settings.

Overall most of the mayors agreed that they have been harassed before. Yet the research found that only 16 percent of those surveyed have thought about leaving office.

“I did not know the rates of harassment, and the problems of social media (in smaller communities),” Adrian Reynoso, sophomore psychology major, said.

The research also found that the harassment of younger mayors comes through social media at a higher rate than that of older mayors.

Godwin was interested in doing research on harassment because she has witnessed and experienced harassment when she worked in local government previously.

“I believe this topic is very relevant to what is happening now in our world today because most harassment is going through social media,” Felicia Beardsley, professor of anthropology, said.

The lecture on Tuesday was the first time Godwin spoke about the project in public.

The research team working on publishing this report in an academic journal.