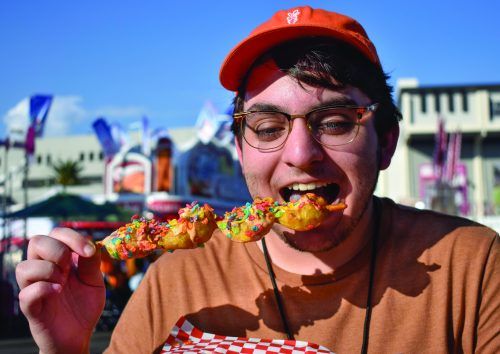 David Gonzalez, Campus Times editorial director, ended up spitting out that first bite of fried shrimp coated with Fruity Pebbles at the Los Angeles County Fair Monday. The fair offers a smorgasboard of food from deep fried to organic vegan and runs through Sept. 22. / photo by Maydeen Merino

As summer begins to fade, the Los Angeles County Fair is here to bring deliciously fried fair food and questionable food combinations for the adventurous foodie.

This year Fruity Pebbles took center stage with different creations like the Unicorn Donut from Texas Donuts, which offers a large variety of gourmet donuts.

The Unicorn Donut is a giant glazed donut topped with Willy Wonka’s Nerds and a cloud of pastel purple and blue cotton candy.

The cotton candy tasted like any cotton candy would with no discernible flavor other than sugar and the donut was fried to perfection. While each aspect of the Unicorn Donut tasted delicious separately, the combination of the pillowy cotton candy, the sour and crunchy Nerds and the fried donut was overwhelming.

This item featured fried shrimp topped with a spicy sauce and Fruity Pebbles.

At first the creation only smelled like fried shrimp, but that story changed when I took my first bite.

The fishy shrimp along with the fruity cereal and spicy sauce was so unpleasant that I had to spit the shrimp out.

The after taste of the overwhelming spicy sauce lasted for hours and seemed to never go away.

This disgusting creation from Get Fried seemed to attract about 15 people a day, usually intoxicated, noted employee Karen Acosta.

“I personally wouldn’t try it because it’s too daring,” Acosta said.

This year the Fair has its new $6.50 POP menu which allows fair goers to have a meal for only $6.50 from any vendor. The new POP menu is 10 cents cheaper than last year’s $6.60 special menu.

The one vegan option at this years fair comes from Govinda’s Veggie Bomb.

Govinda’s $6.50 POP menu item featured a drink choice of ginger lemonade or cranberry lemonade and an Atomic Taco, which was topped with a barbecue jackfruit trying to mimic pulled pork, a homemade vegan mayo, carrots, cabbage and cilantro.

The Atomic Taco was a much needed escape from the fried food sold at every surrounding food vendor. Every bite was refreshing and flavorful and convinced me that I was eating real meat.

The cranberry lemonade offered was the perfect compliment to the savory taco, with none of the flavors overpowering the other.

Clayton, 44, and his brother Govinda, who owns the food truck, have been vegetarian their entire life and have never eaten meat.

“We like to have sustainably sourced, eco friendly [products], and we believe in non-violence so we avoid food products that cause harm to animals,” Clayton said.

Fresh corn is a staple food item, and this year fair goers could try the new and colorful “Unicorn” from Crazy Corn.

The “Unicorn” is covered in neon blue, orange, yellow and red Parmesan cheese and is painted with a magical blue mayonnaise.

While the bright colors of the “Unicorn” gave me the impression of wacky flavors, it tasted like regular corn.

The flavors of the fresh corn along with the salty Parmesan and creamy mayonnaise create a new flavor unlike any other and offers a deliciously fun way to eat corn.

Jay Libras, Pacoima resident, said that his go to fair food tend to be items like corn dogs and garlic fries.

Libras said that he saw different menu items that seemed outrageous like the giant turkey legs and bacon donuts, but did not try them.

Other fair goers like Pomona resident Saniah Rodriguez also did not try some of the wilder creations at the Los Angeles County Fair this year.

“I didn’t try the Hot Cheetos Pickles because I just didn’t,” Rodriguez said.