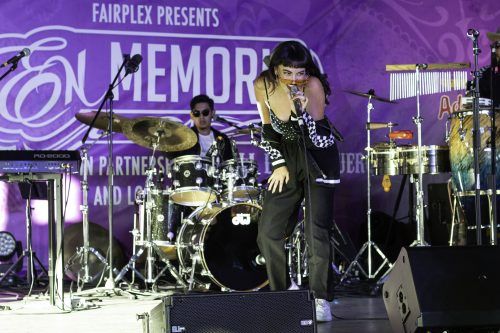 Veronica Rosa, singer for the band Introverted Funk, performs a song at the En Memoria event at the Fairplex Saturday. This Dia de los Muertos celebration brings together Latino artwork and culture with the low rider community. / photo by Melody Blazauskas

Low riders, food, live music and entertainment filled the scene at this year’s En Memoria event at the Fairplex Saturday.

En Memoria is a Dia de los Muertos celebration that brings together Latino artwork and culture with the low rider community.

Elite Car Club, one group that helps sponsor the event, invited several other car clubs throughout Southern California to participate.

Low riders have been known to represent Latino culture, and several of the event participants described low riding as a family tradition that has been practiced for generations.

“Growing up my dad had custom cars, my uncles all had custom cars. It’s like when you get your bicycle, you fix it up and do something to it to be different,” Jacob Garza, member of the Unidos Car Club said.

One of Garza’s cars was a 1953 Chevy, which he decorated with a traditional Dia de los Muertos altar to celebrate and display his lost loved ones.

“This is all a part of our Hispanic culture, it’s good to come out if you want to get back in touch with your roots,” Garza said.

Sylvia Elerick, owner of a blue 1969 Lincoln Continental, was a first year participant of the En Memoria event.

“Low riding is not for everybody, but if you like to check out something different in your community, especially here in Pomona, I would recommend to get out of the house and come expose your family to a different culture,” Elerick said. “It’s low and slow, as they say. We have been part of it since we were growing up; back in the day we have always been exposed to this low rider culture.”

The event allows individuals from all over the area to enjoy and learn more about the low-rider culture.

“I like the car show and I am excited for the food,” Dana Park, student of Western University of Health Sciences in Pomona, said. “I have never been to anything like this, so it’s different from what I am used to seeing.”

The event provided several other forms of entertainment for guests to enjoy such as live music with bands like Introverted Funk; Selenamos, a Selena tribute band; and traditional dances such as Folklorico, performed by students from the Tradición Dance Company in Pomona.

“I thought it was a great event and showed me that there is strong ties and culture in that community. A lot of them (car owners) honor their family members that have passed which stood out to me the most,” Fontana resident Amberly Olguin said. “I think the event could have had educational boards that discusses the history of low riders and where they plan on going in the future, that way people like myself not from the culture can have a stronger understanding and appreciation of it.”