Michelle Enfield of the Red Running Into The Water People clan, born from the Black Streak Wood People clan, presented the history of Native Americans and the term ‘two spirit’ which she recently chose to identify as.

Enfield is an advocate for the Native American population and has served underrepresented populations like the homeless LGBT youth in Hollywood.

She is also the program coordinator for the Red Circle Project, the only HIV Prevention Program in Los Angeles County that specifically provides services to the Native American and Alaska Native community.

In honor of Indigenous Heritage Month, roughly 50 people attended Enfield’s presentation that covered the media’s misrepresentation of Native Americans and her own personal stories of transitioning Monday in the President’s Dining Hall.

Enfield is from the largest Indian reservation in the United States called the Navajo Nation; the reservation spans into northern Arizona, northwest New Mexico and southeast Utah.

Enfield said she enjoys speaking at educational institutions because of the many working minds in search of new information.

She said it is important to discover the truth behind the world’s history to gain a deeper, more comprehensive outlook on the world.

“I have a different attitude and perspective than most heterosexual, cisgender, caucasian, western thinking men,” Enfield said. “I grew up with a different worldview and because of these things I would not describe situations in the same manner as they would.”

Enfield said she started to experiment with makeup in 7th grade by using her cousins eyeliner.

“I would use just enough for me to notice,” Enfield said. “I was very cognizant that if I got caught something might go down. When I entered high school and college I started wearing more makeup, like supermodel stuff.”

Enfield was 27 years old when she first started hormone replacement therapy after years of contemplation.

“It was rough and people think since I come from an indigenous background it was harmonious,” Enfield said. “One of the challenges causing me to not say yes right away was about my mother. I wondered how she would feel and think about this.”

After she realized her mother did not pay her bills or take care of her anymore, she decided to go through with the therapy.

“I stated I am nadleeh which is an active word and signifies constant evolution,” Enfield said. “It is a male born individual who possess female qualities and freely expresses those qualities without shame.”

The Indian Health Service describes the term ‘two spirit’ as male, female, and sometimes intersexed individuals who combine activities of both men and women with traits unique to their status as two spirit people.

“The term two spirit began in 1989 and in 1990 at a Native American LGBT conference in Canada,” Enfield said. “Two spirit is the gift of realizing that masculinity and femininity are equally important in the flow of nature and it does not matter what racial qualities any person possesses of either characteristics.”

Enfield said she prefers to be identified as two spirit instead of transgender.

“I have identified as a woman, trans, female and girl,” Enfield said. “Until last year I started to identify as two spirit. started thinking of my identity and the oppression the word transgender placed upon me.”

Lorali Mossaver-Rahmani, senior anthropology major and president of the Language and Culture Club, said it was eye opening to see Enfield speak freely without shame.

“Especially at our campus we need to hear those sometimes uncomfortable things,” Mossaver-Rahmani said. “It was a productive conversation and to have her here during Indigenous Heritage Month was special.”

Mossaver-Rahmani said it was interesting to hear Enfield speak about her sexual explorations since that topic is often ignored.

“People are curious about sexual explorations and it was cool to see that openly expressed,” Mossaver-Rahmani said. “There was a commonality there which made it not foreign. Everyone who is cisgender needs to hear that and realize it is not that scary.”

Enfield said the media often perpetuates the idea that indigeneity is something of the past.

She spoke about the mascot for the Washington Redskins NFL team and how that is a way the media strips indigenous people of their culture.

“The issues around having stereotypes like mascots of indigenous people in the world, is that it takes away from our modern identity,” Enfield said. “It creates more distance between us and society, because most of the public have no direct contact or personal relationship with indigenous people.”

Enfield said it was a major milestone to celebrate Indigenous People’s Day for the first time which used to be known as Columbus Day.

“It took a lot of hard work from our community and allies to achieve this,” Enfield said. “The main reason to celebrate Indigenous People’s Day is to acknowledge indigeneity and the misconception that colonization has improved the world’s well-being.”

“I am giving to you my body, my image, my presence and my mind,” Enfield said. “This is how I want to be paid and it makes me feel good today to be a representative of the indigenous community and let you know about the history.” 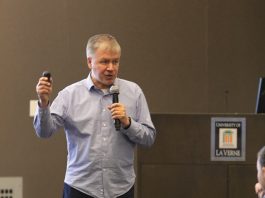 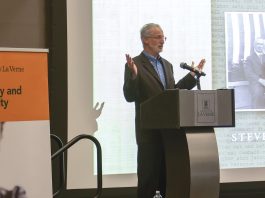