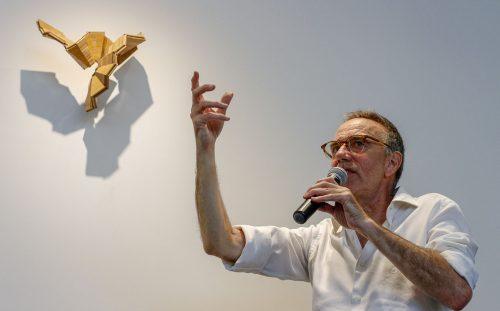 Keith Lord, professor of art, talks about his piece, “2 Untitled” made of bamboo flooring, one of seven sculptures in the exhibition, “Articulation: New Wall Works,” Wednesday in the West Gallery. Lord said that he finds or is given the materials he uses in his work. He said he cuts wood from frame and crown molding, ceiling beams, lumber and flooring by feel instead of planning the sculpture before its creation. Lord said he once used computer programs to plan his art, but prefers surprises, or “happy accidents” while creating. / photo by Tyler Evains

About 30 people gathered to view the seven wood sculptures described by Lord as depicting personalities resembling states of being.

Lord said he gained inspiration for this exhibit after realizing he was becoming more of a book artist, which limited him as an artist.

Lord wanted to create pieces that give control back to the viewer and initiate dialogue about his artwork.

“I was exerting a whole lot of control over the viewer,” Lord said. “I was like ‘here is how you have to see my work’ and it felt harsh. I wanted to relax so the viewer could look at it as closely and intimately as they wanted or just glance at it and still have that experience.”

The wood sculptures explore the relationship between natural wonders and engineered designs while presenting graceful appearances.

Michael Frantz, professor of mathematics, who has taught a course on math, art and music with Lord for 12 years, hosted the reception.

“As always, when we teach our classes I always walk away learning new things,” Frantz said. “I have been through material tons of times, but when I do things with Lord he always teaches me something new.”

“I have always been sort of a scavenger so I would drive by and look into dumpsters,” Lord said. “I found a dumpster behind a hardwood store in downtown L.A. I was not sure what I was going to do with all the wood, but I thought ‘hey free art stuff.’”

Lord related how he rescues dogs to the nature of acquiring his art materials.

Lord invested in a compound miter saw and wood glue to begin his project.

“I like the idea that the wood kind of surprises me,” Lord said. “I tell my students you kind of have to dance with the material and sometimes the material is going to tell you ‘nope I want to do this’ and you cannot always control it.”

David Chappelle, associate professor of psychics, said he found the pieces to resemble a mathematical or geometric sequence.

“It looks like an interesting mathematical curve–the way they twist and curve,” Chappelle said. “My mind wanders when I look at these pieces and I start to think how you can generate something like this mathematically.”

Chappelle, who team teaches a course in physics and art, says the concepts of math and art intersect in multiple ways.

“Most people do not think about math and art as having similarities,” Chappelle said. “Each of these disciplines can be creative and once in the field you see that there is a lot of creativity on how to approach a problem.”

“It is important to have each piece serve an individual purpose while also supporting one another,” Johnson said. “The personalities of each piece dictated their position, so I just positioned the pieces in a way to amplify them more.”

Lord said when he first started cutting the pieces they resembled a relationship; like two elements clinging to one another, but found a different meaning as he concluded the project.

“These are singular pieces, so rather than being in a relationship it is about a state of mind,” Lord said. “I see them as personalities and exploring how you can express a state of being.”

When asked why he uses scrap materials for his projects, Lord said it is based on his socio-political stance and interest to be more gentle to the earth.

“There are many materials out there that we can make art out of that do not need to be manufactured,” Lord said. “All of these pieces are being reused and have had previous lives.”

Lord’s exhibition is available for viewing at the West Gallery located on the second floor of the Campus Center.